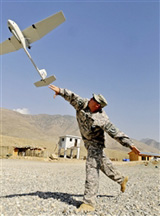 LAGHMAN PROVINCE, Afghanistan, Oct. 19, 2009 – Odin was a warrior god in Greek mythology who ancient warriors beseeched for victory and protection in battle. It was said Odin had ravens that would fly over the Earth each day. The ravens brought tidings of events from all corners of the earth.

Soldiers here today also are using Ravens to gather information. But though their Ravens do the same tasks as Odin’s informants, they aren’t birds. They are unmanned aerial vehicles.

The Raven is a portable UAV that provides soldiers a live video feed both day and night and also has tracking and still-image capabilities.

“If we need to get eyes on something, we’ll use the Raven,” said Army Staff Sgt. Tyrone Baird, the master trainer for the 4th Infantry Division’s 1st Squadron, 221st Cavalry Regiment, 4th Brigade Combat Team. “The Raven has a couple of cameras. The first is the normal day camera, but when it gets dark, we switch to the thermal camera.”

Army Spc. Mitchell Matney, a Raven operator for the regiment’s Headquarters and Headquarters Troop, agreed with Baird’s assertion and explained the Raven’s usefulness.

“The Raven allows us to gather intelligence,” he said. “We can track targets, gather intel and scout ahead with it.”

The Raven’s small size allows soldiers to carry it into the field without weighing themselves down. Matney said the total system weighs about 40 pounds, with the UAV itself weighing only about 4 pounds.

“It’s modular,” the Las Vegas native said. “You can distribute the system throughout the squad, which minimizes the amount of weight each [soldier] has to carry.”
Baird said that makes the Raven ideally suited for Afghanistan’s more rugged areas, because soldiers can put it in flight to scope out an area instead of sending soldiers up the mountains to investigate.

Matney added he has witnessed first-hand the Raven’s capability to save lives.

“The last time I was in Iraq,” the native of Pahrump, Nev., said, “my [forward operating base] was receiving mortar fire, and we sent the Raven out to find their position. The Raven found where they were. We sent out some guys. They ended up capturing 12 guys and stopping them from hurting anyone.”

Though it’s an important tool for soldiers in Afghanistan, the Raven still enjoys a hobbyist type of enthusiasm from its operators.

“The Raven is really fun to operate,” Matney said. “Flying it is kind of like playing a video game.”

Baird agreed and expressed the pride he feels in making an impact while enjoying the simplicity of the Raven.

“It is definitely fun to fly,” he said, “but the more important thing is knowing that I am contributing many different ways with the Raven. I am proud to be able to serve my country.”