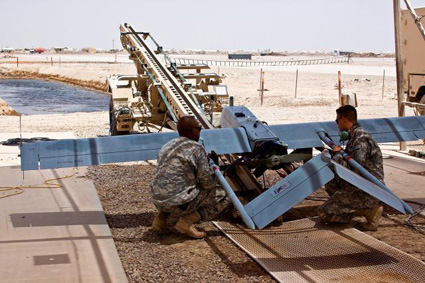 WASHINGTON– It is 2230 hours and the moon casts jagged mountain shadows on an Army patrol as the Soldiers bed down for a well-deserved rest deep in enemy territory.

The bone-tired Soldiers try to make themselves as comfortable as possible in the unforgiving rugged and dusty terrain of Afghanistan while still remaining alert of any enemy activity. Tonight however, they are reassured that they have the edge – because circling overhead is a nearly silent sentinel – an unmanned aerial vehicle, or UAV, keeping a watchful eye, like an eagle protecting her eaglets.

The emergence of Unmanned Aerial Vehicles technology in the mid-1990s has made Unmanned Aircraft Systems the weapon of choice for the Army commanders engaged in contingency operations in Iraq and Afghanistan. They have proved invaluable in Intelligence, Surveillance and Reconnaissance missions.

During the past six years of combat operations, the Department of Defense has experienced unparalleled rapid growth in unmanned systems. From 2002 to 2008, the total number of unmanned aircraft increased from 167 to well over 6,000. UAS’s are proving themselves in key operational roles and are embraced by the warfighters who employ them. The Army assigns UASs to missions that are dull, dirty, and dangerous.

“We can send a UAS down an alley, use it to look around corners, or look on a roof to see what’s up there, dramatically increasing Soldier protection and preserving the force – a vital force multiplier in this era of persistent conflict,” said Maj. Gen. James O. Barclay III, commanding general of the United States Army Aviation Center of Excellence and the commanding general of Fort Rucker, Ala.

Just as the mechanized warfare and airpower resulted in a revolution in military affairs at the turn of the 20th century, some predict the introduction of Unmanned Aircraft Systems will have significant implications on how wars are fought for generations to come.

In October 2007, the Army vice chief of staff directed the establishment of the U.S. Army Unmanned Aircraft Center of Excellence at Fort Rucker, Ala.

The purpose of the center is to lead the Army’s effort to synchronize all Army unmanned aircraft systems technology with DoD, sister services, functional Army proponents and industry stakeholders.

Today, the UAS CoE is the Army’s integrating agency for all unmanned aerial vehicles related issues and serves as the single source and voice for all Army UAS strategy. The mission of the Army UAS CoE is to integrate Unmanned Aircraft Systems technology into the modern battlefield to provide field commanders with decisive vertical and horizontal advantages over their adversaries in the fight.

To smoothly integrate UAS’s into Army operations UAS CoE has been strapped with several essential tasks. One major task is to standardize tactical joint forces to include the Navy, Marine and Special Forces’ UAS integration, personnel and training to institutionalize inter-service cooperation.

The Army and Marine Corps have demonstrated the operational benefits of using UAS technology, in both Iraq and Afghanistan, enabling greater lethality while reducing fratricide and collateral damage.

The UAS CoE is also charged with telling the Army UAS stories of successes (and shortcomings) to the American public and the United States Congress. According to Carlile, “These systems, in effect, are tactical unit commanders’ “flying binoculars” enabling them to seize opportunities and minimize risks to Soldiers. It’s a story that needs to be told.”

To facilitate getting the UAS story out to both Soldiers and the American public, Army UAS CoE has several venues and tools available for networking stakeholders, collaborating efforts, and enhancing knowledge management.

• UAS Board of Directors – The UAS BoD and its corresponding Working Group is the most enduring of these venues. The BoD Working Group meets monthly (second Tuesday of each month) and the UAS BoD convenes periodically to provide updates, share Information, and obtain strategic guidance from senior leadership.