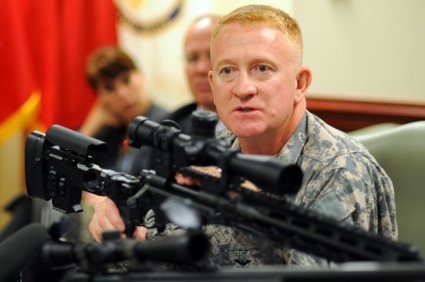 The Army expects to field the new sniper rifle, the XM2010, by January. And conversion kits for the M4 rifle will come next year.

A panel of program managers from Program Executive Office Soldier met Oct. 14 at the Pentagon to discuss the status of several programs in the PEO’s portfolio. Included in the discussion was the status of the new sniper rifle, development of the Operation Enduring Freedom Camouflage Pattern uniform for use in Afghanistan, Mounted Soldier System development, and the improvement program for the M4 carbine.

Col. Douglas Tamilio, program manager for Soldier Weapons, said the Army will do a request for proposal in the next three or four months to complete the Army’s acquisition objective for M4 rifles. That RFP will include more than 14,000 M4A1 rifles — an improvement over the M4 Soldiers currently use.

“What the M4A1 gives our Soldiers is a heavy barrel and fully automatic — that’s what the field is asking for,” Tamilio said. The M4A1 also features ambidextrous controls.

The Army already has a contract with Colt to produce the rifles. The second contract, in the next fiscal quarter, will help the Army complete its AAO and will include additional rifles for both foreign military sales and to meet other Army requirements. Tamilio also said the Army will work a contract to procure some 65,000 kits in FY 2011 to convert M4s already in the field to the M4A1.

Other phases of M4 improvement involve a better bolt and rail.

“I think we can get significant increases in reliability by looking at some new enhancements to bolts,” Tamilio said. “Because a lot of companies have shown some bolts over the last year or so that have got, we think, improvement. We’re going to ask industry to give us their best.”

Tamilio also said fielding of the new sniper rifle, called the XM2010 — the name is a departure from the Army’s formally two- or three- digit weapon naming scheme — has come quickly.

“In less than a year we’re going to be fielding a piece of equipment that is going to add to the lethality of our Soldiers in the field,” he said. The XM2010 is an improvement on the M24 sniper rifle system. A contract for production of the system was recently awarded to manufacturer Remington. Tamilio said it’s expected fielding will happen in January.

The new rifle features a suppressor to allow Soldiers to fire the weapon in a suppressed environment and to also reduce muzzle flash. Also included, a fluted, free-floating barrel to give Soldiers more accuracy and heat dissipation. The weapon also sits on an improved bipod, Tamilio said, and features a modular rail system.

“(You can) screw a 1913 rail adaptor anywhere on here,” Tamilio said. The system is unique in that it allows Soldiers to install a laser aiming device, for instance, and run the cord for that device inside the rail so they can install a activation button.

The included scope also features a reticle that will adjust based on the scope’s zoom factor to maintain accuracy, is magazine-fed, has a 1,200 meter range, and a fully adjustable and collapsible butt stock.

“The key behind this weapons system — the developments and improvements were built on what the snipers asked for,” Tamilio said.

Col. William Cole, program manager for Soldier Protection and Individual Equipment, said the Army is focused on a world-wide solution for Soldier uniforms — an Army combat uniform available in patterns and colors that allows Soldiers to operate in nearly any environment.