by John Fasano
in Guns, Rifles
0

0
SHARES
95
VIEWS
Share on FacebookShare on Twitter
Designed for urban sniper applications, the CZ UCS’s 37-inch overall length made getting into a final shooting position more than manageable by anyone’s standards.

Ceska Zbrojovka, or CZ, has been making weapons for military, police and sportsmen from their headquarters in the former Czechoslovakia since 1936. Their CZ-75 pistol and Vz-58 Assault rifles are known worldwide for their reliability and accuracy.

On the sporting fields and the games plains of Africa, the controlled-round-feed bolt- action 550 rifles manufactured by CZ have been the first choice of working professional hunters for more than 60 years. The company took that experience and put it into the bolt-action Model 550 Urban Counter Sniper, designed from the ground up to fill the military and police marksman’s requirements.

Smooth operation! Engineers at CZ were using their proverbial heads! The bolt on the CZ-USA’s Urban Counter Sniper is controlled round feed—capturing the round as it strips it out of the magazine.

550 UCS Lineage
The 550 UCS is chambered for the .308 Winchester/7.62mm NATO cartridge and is directly descended from the CZ 750 S1M1 Sniper rifle. The CZ 750 is fielded with a hammer-forged 26-inch barrel housed in a synthetic thumbhole stock with an adjustable cheek rest.

As with most modern military tactical bolt guns, the underside of the fore-end is fitted with a rail that provides multiple attachment points for a bipod, and the rifle also features a muzzle brake, thread protector, mirage shield and two 10-round detachable magazines. The 12-pound CZ 750 Sniper will reach out to targets in excess of 800 yards. It is the current issue .308-caliber long arm of the Spanish Municipal Police, the Slovakian Ministry of the Interior, and Mexican National Defense Forces. 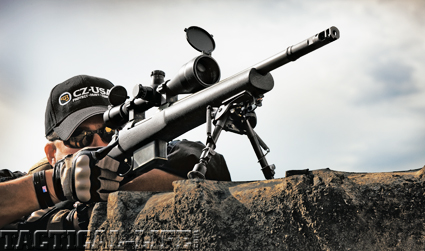 Excellent ergonomics of the 16-inch barreled Urban Counter Sniper were matched by sub-MOA accuracy during testing.

CZ On Duty
In Spain, cities with less than 5,000 residents usually don’t have their own organized police force. These towns and cities are served by the Policia Municipale. The Municipal police wear blue uniforms and patrol in white or blue cars and up-armored HUMVEES. Municipal Police jurisdiction extends from minor crime such as traffic control and protection of property, to the civil disturbances so common in European countries. In Spain’s resort areas, they usually find themselves dealing with misbehaving tourists, but last year broke up an arms-trafficking ring on the Island of Majorca where they recovered 300 weapons including machine guns and grenade launchers, as well as a seven-man Al-Qaida cell working out of Barcelona.