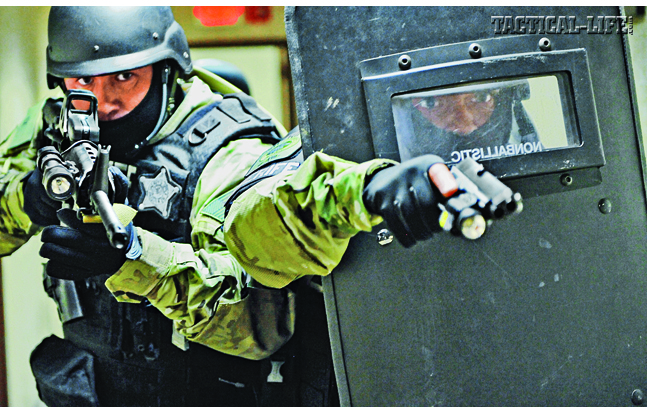 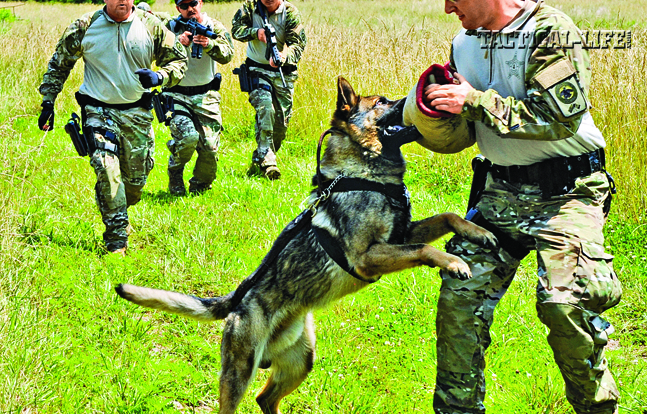 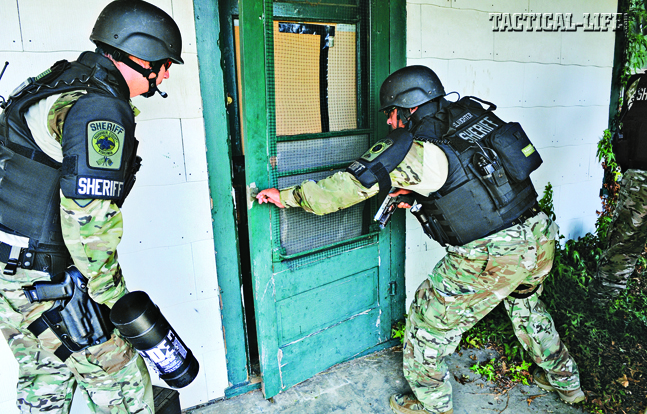 3 of 5
Urban Rural Sert Specialists 3
Roughly 90 percent of the SERT’s calls are for high-risk warrant service. Here the team perfects its breaching tactics in a mock rural area. 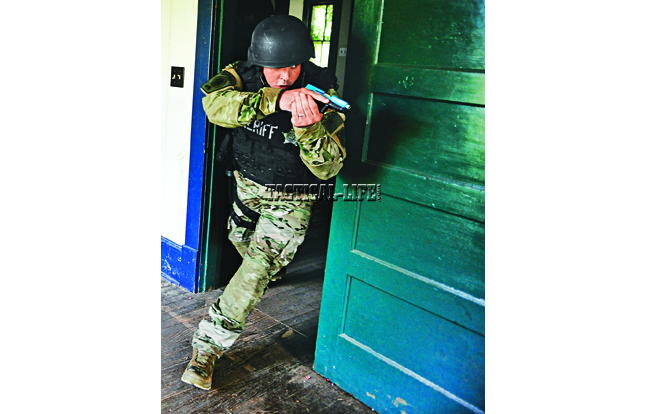 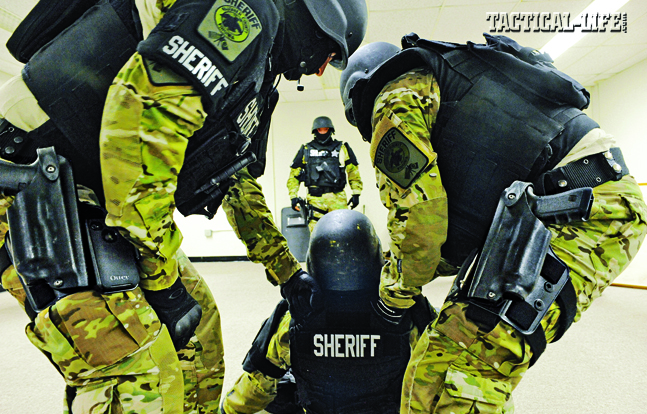 5 of 5
Urban Rural Sert Specialists 4
The Fauquier County SERT team trains for many possible scenarios, including rescuing a downed officer during a firefight. 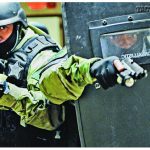 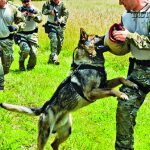 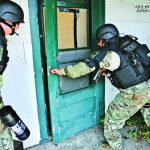 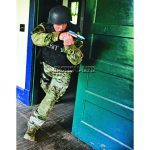 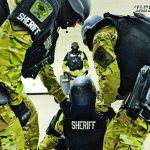 Crime doesn’t stop when the concrete does. As Washington, D.C.’s urban sprawl creeps 60 miles down I-66 West toward the slower-paced lives of the people of Fauquier County, Virginia’s fifth-largest dairy producer, the county’s sheriff’s office remains charged to protect and serve its 67,000 residents who chose the freedom, peace and tranquility that cow country gives them over the immediacy and convenience of city life.

For the most part, they get just that. The good live their lives in the shadow of the nation’s capital without fanfare. Cows, horses and deer, lots of deer, dot the landscape. Crime exists, but it’s nothing like the stuff they see where the D.C. Metrorail runs instead of the deer. But, if and when serious crime ever does happen, Fauquier is ready thanks to a little-known team of volunteers from its police force that specialize in the unexpected.

Emergency Response
Known in law enforcement circles as the Sheriff’s Emergency Response Team, or SERT, this team is a very highly trained and specialized unit compared to the typical patrolman in Fauquier. According to the team’s commanding officer, Captain Patrick Coffey, SERT’s purpose is to provide the type of tactical response necessary to safely diffuse or bring to a close certain types of high-risk or threatening situations. Coffey said 90 percent of the team’s calls are for high-risk warrants.

The team’s missions include other situations as well, including but not limited to barricaded or suicidal subjects and drug raids. Coffey said the team utilizes specialized equipment and tactics, which make them an invaluable tool for the sheriff’s office in enhancing the public’s safety.

Still, SERT teams aren’t new to the police force, even in the country. How hard can the mission be for the sheriff’s “elite” police force in a place where trees outnumber deer, and the deer probably outnumber the people? It’s harder than people might realize, according to Corporal Justin Cuomo, a City of Falls Church SERT team member.

“Open space isn’t your friend in law enforcement,” said Cuomo. “Out in the country, there’s more woods, more hunters and longer response times, and all of those things factor into the SERT mission.”

Cuomo spent the day training Fauquier’s SERT volunteers on room-clearing tactics. In the police realm, brothers often volunteer their time and expertise to train cross-county brothers, and Fauquier’s SERT is no different. “It’s all about mindset and tactics,” said Cuomo.

Still, trees or concrete, Cuomo said SERT training is the same regardless of the budget. In fact, the team only gets 12 training days per year to learn the county’s most dangerous and demanding job because of the sheriff’s limited budget. Few police budgets allow for teams to go to every training opportunity across the country, and on a team like Fauquier’s, “average” money is still more money than what they get despite living in the eighth-richest county in the country. As such, the team is made up of regular officers who lead day-to-day lives as normal sheriff’s deputies, and when the call comes, they drop what they’re doing and report to Coffey or his executive officer, Lieutenant Ray Acors.

On Fauquier’s SERT, the officers wear many hats. They have three snipers, three dog handlers (including for one bloodhound) and a medic, but everyone, according to Acors, cross-trains first as a team member, then they learn specialized roles secondarily as a necessity because of their limited size. “We have no idea who will be able to show up at the next call, so we cross-train,” said Acors. Fauquier’s SERT trains their team based on scenarios, according to Coffey. “We teach our guys to feed off the man in front of them, and our guys are never alone,” said Coffey.

The biggest scenario in being a rural SERT always takes into account the likelihood that the next call will be for a person whose house is hundreds of yards behind his property line with hills, trees, livestock and other cover standing between him and the SERT team, according to Acors.

Fauquier County is rural, but it has a few towns, the largest being Warrenton. That fact, according to the team’s leader, Detective Brandon Lillard, adds to mission complexity. “Unlike most urban-based SERTs, we prepare for and respond to both urban and rural situations—the worst of both worlds—and each call is mission specific,” said Lillard.

The uncertainty makes equipping a team like Fauquier’s difficult, and potentially expensive. The team has the standard mix of weapons, tactics and supplies like ARs, HK MP5s, pistols, breaching devices, and precision weapons. It’s the scenarios that are different. “One of the biggest problems out here for our guys is having to respond to someone who most likely is armed with a high-powered rifle and knows his land well,” said Acors.

Acors said it’s hard for the SERT to approach someone like that with what they have, and they’d like to get an Armored Personnel Carrier (APC) style vehicle to help shield the team if they ever need to get into a place where open space and firepower might otherwise inhibit their movement.

Skilled Operators
Fauquier’s team is made up of both military veterans and career police officers who were drawn to the tactics and missions SERTs are used for. The familiarity of the tactical vests, close-quarter-battle (CQB) tactics and small-unit leadership are all too familiar to a retired Marine like Corporal John Slaughter, who has more than 14 years of police experience including 12 with SWAT, which serves the same purpose on police forces as SERT.

“People think being on a SERT in the country is easier,” said Slaughter, who served both in the Marines and with the City of Richmond’s police force. “The elements out here, the fact that there’s a lot of hunters with long-range weapons, make our job harder than straight urban SERT missions.”

Officers like Slaughter and Lillard were drawn to SERT because of its mission, the kind of people who are drawn to it, and the adrenaline rush that can only come from being on-call for the county’s nastiest police situations.

One thing is for sure, none of the officers on the team said the extra pay they get as a SERT member is what draws them there or retains them. “It’s not worth the extra money we get,” said Lillard. “We do this because we love it.” 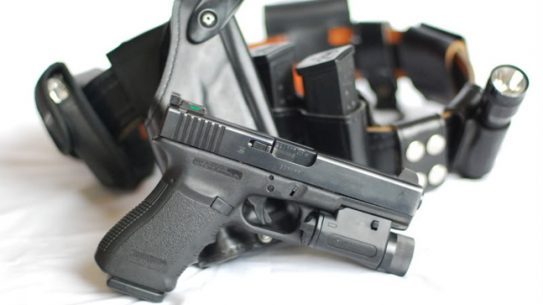 The Mille Lacs County Sheriff’s Office will issue Glock duty pistols for its 37...