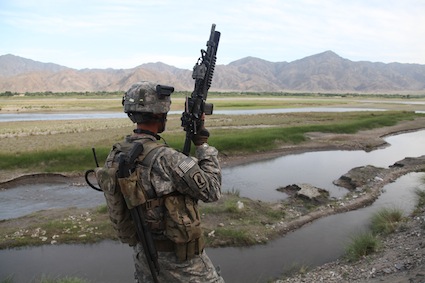 The US-led surge of troops in Afghanistan is proving successful, with the Taliban on the defensive despite persistent bloodshed, the UN envoy to the country said.

The assessment by Staffan de Mistura, the UN special representative in Kabul, contrasts with weariness among the public in the United States about the country’s longest war which will reach the 10-year mark later this year.

General David Petraeus leads about 100,000 US troops in Afghanistan, part of a strategy laid out in December 2009 by President Barack Obama to scale up the war launched after the September 11, 2001 attacks.

“The fact is that the surge by General Petraeus… is working,” de Mistura said at the Middle East Institute, a Washington think-tank.

De Mistura, a friend of Petraeus since they served together in Iraq, acknowledged that violence in Afghanistan “looks very bad.” But he said the Taliban were attacking away from areas where they were under pressure — and alienating Afghans through indiscriminate killings.

“These are mistakes produced by the feeling that there is a need to produce a counter-narrative to the reversal of the momentum” of the Taliban, de Mistura said.