The USAF’s pararescuemen are among the most highly trained troops in the U.S. Armed Forces. Also known as parachute jumpers (PJs), they are qualified combat medics—their mission is to rescue and extract personnel, who are typically injured, from behind enemy lines. But PJs also receive a wide array of other training. Within the U.S. Armed Forces, PJs are considered the premier combat search-and-rescue (CSAR) unit. For inserting and carrying out rescues in hostile environments, PJs receive training in close-quarters combat (CQC), insertion methods and combat survival. PJs have also deployed to assist in civilian rescues during natural disasters such as Hurricane Katrina and to work with NASA to retrieve astronauts and craft that splashdown in the ocean.

The Air Rescue Service was initially established in May 1946, though there had already been cases of medics parachuting in to assist injured personnel during World War II. Over the next few years, training for pararescue personnel had evolved, and by the beginning of the Korean War, each Air Rescue crew included trained PJs. By the end of the Korean War, Air Rescue personnel had rescued almost 1,000 men from behind enemy lines and evacuated over 8,000 casualties. 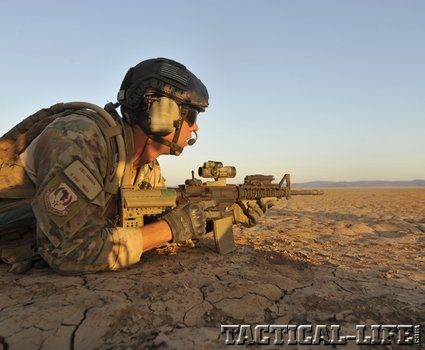 It was during the Vietnam War, however, that the PJs really became heralded for their successes. PJs would often be inserted into an area to load injured aircrew onto a jungle penetrator or into a harness for evacuation. At other times they might have to be inserted and find a downed pilot or crewmember while escaping and evading the enemy in enemy territory. Some rescues were carried out in North Vietnam. The PJs normally went in on Jolly Green Giant HH3 or Super Jolly Green Giant HH53 helicopters, which typically had their own minigun for support fire. These choppers were also part of a “package” that included AH-1 Cobra gunships, A-1 Skyraider “Spad” ground-support aircraft and combat air patrol, which included fast movers. As an indication of the danger faced by PJs in Vietnam, of the 19 Air Force Crosses awarded in Vietnam, ten had gone to PJs.

PJs have played a part in virtually every military action since the Vietnam War, including in the Persian Gulf, Somalia, Iraq and Afghanistan. PJs received the Air Force Cross for actions during the Battle of Mogadishu in 1993 and during the Battle of Takur Ghar in 2002. During the War on Terror, PJs have been involved in the rescues of hundreds of U.S. personnel, often in extremely hazardous conditions in the mountains of Afghanistan. Currently, PJs are assigned along with combat controllers, tactical air control parties, and special operations weathermen to Air Force Special Tactics squadrons, which can carry out an array of Air Force related special operations anywhere in the world. Two special tactics squadrons are based overseas: the 320th STS at Kadena Air Force Base, Japan, and the 321st SDS at Royal Air Force Mildenhall, UK. The 320th assisted with rescues in Japan after the 2011 earthquake and tsunami.

To be considered for training as a PJ, a candidate must be able to meet the following minimums on the physical ability and stamina test, or PAST (for a better chance at being selected for training, applicants should strive for even higher standards): run 1.5 miles in 9 minutes 47 seconds; swim 500 meters in 14 minutes; do 10 pull-ups in 1 minute; do 54 sit-ups in 2 minutes; do 52 pushups in 2 minutes; and do two 25-meter underwater swims with a 3-minute break in between.

Candidates who score high enough on the PAST and on the Armed Services Vocational Aptitude Battery and have vision correctible to 20/20 can move on to the Special Tactics Candidate Course at Lackland Air Force Base, Texas. Both pararescue and combat control candidates go through this nine-week team training course, which includes running, swimming, other physical training, medical and diving terminology, CPR, weapons handling and the physics of diving.

Those who have successfully made it through this training continue on to 15 weeks of training at the U.S. Army Airborne School, the U.S. Air Force Combat Divers School, the U.S. Navy Underwater Egress Training, the U.S. Air Force Basic Survival School, and the U.S. Army Free-Fall Parachute School. At this point, the prospective combat controllers and PJs split off to their specialized schools. PJs attend the Special Operations Combat Medic Course, which lasts for 20 weeks, and then the Pararescue Recovery Specialist Course, which lasts for 24 weeks. The latter course includes techniques for rescuing and treating personnel in multiple scenarios. Prospective PJs learn mountaineering, helicopter insertion and extraction and small-unit tactics. Tactics and weapons handling are particularly important for PJs since they will be operating in enemy-controlled territory and will need the ability to defend themselves, their teammates, and those they are attempting to rescue. Once fully qualified, PJs wear the maroon beret with the pararescue beret badge. 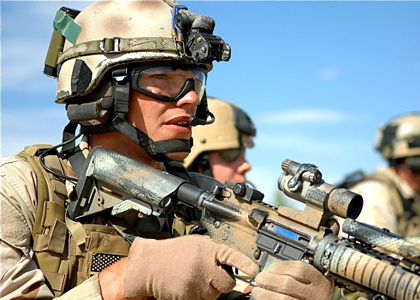 A PJ scans the area with his M4 carbine at the ready. Note the camouflage pattern applied to the carbine. Optic is an AimPoint CompM4

PJs have traditionally been deployed from the MH53 Pave Low, the most recent special ops version of the Super Jolly Green Giant helicopter, which was configured for CSAR. However, the Air Force is now using the CV-22B Osprey for CSAR and for other special operations.

The nature of their mission often requires PJs to transport injured personnel or carry out medical treatment, so PJs are normally armed only with individual infantry weapons. For some time these have consisted of the M4 Carbine, often with enhancements from the SOPMOD kit, and the M9 Beretta. Sometimes USAF carbines will be seen designated GAU-5, which is Air Force terminology for M16-based carbines. I have also seen PJs train with the HK MP5, but I doubt the HKs are often used as M4s are still the better choice for the PJs’ needs. A lot of the PJs’ M4s have mounted grenade launchers, though they’re probably for Star & Ground Marking rounds rather than for high explosive rounds. For close-range work, M576 buckshot rounds may keep the enemy at bay during extractions!

PJs have access to many weapons in the Air Force Special Tactics armory, such as the SR-25 semi-auto sniping rifle and the M-21 Sniper Weapon System, though they would probably not be authorized for normal missions. When PJs need something heavier than an M4, they’re likely to count on the GAU-17 minigun on their Osprey, if it is overhead. When working with other special ops units, PJs can rely on their operators, who are armed with sniping rifles or light machine guns.

Since PJs sometimes operate along with other U.S. special operators, they receive a substantial amount of tactical training in order to fight alongside other operators. Operations in Iraq and Afghanistan have had an influence: PJs are now learning building-clearing tactics, in case they have to carry out an entry to make a rescue. Reportedly, PJs are also receiving at least some foreign weapons training, in case they need to use them to use enemy or foreign-ally weapons to keep fighting.

The USAF Pararescuemen are skilled with their weapons, but their real skill is in giving immediate medical treatment to patients and stabilizing them until they can be evacuated. The JPs’ weapons are designed to protect the patients and themselves during these rescues. The Parasrescue motto is “that others might live.” If an enemy must die to keep the patient alive, so be it.

For an Osprey Weapons book on the Beretta M9, I had been choosing artwork subjects. I wanted to illustrate possible combat uses of the M9. I had the artist illustrate two Air Force PJs getting a wounded aircrewman to a helicopter while under fire. One PJ was giving covering fire with his M4. The other, with his M4 slung, carries the injured crewman in a fireman’s carry, while firing his M9 one-handed at the enemy. For me, this illustration encapsulates the PJ’s job: using medical treatment and weapons to keep the patient alive!