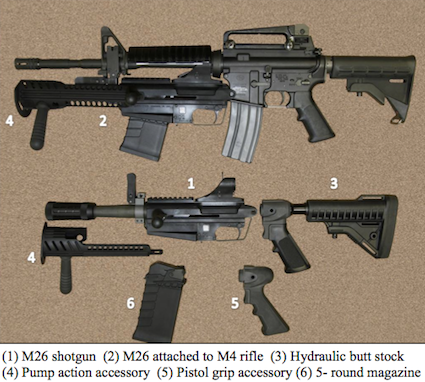 The US Army awarded $5.5M to C-MORE Competition for 2,500 advanced, 12-Gauge, combat shotguns, known as the M26. The M26’s modular design allows it to be attached under the barrel of a soldier’s M4 rifle and used to breach (blow open) doors and quickly enter buildings to neutralize insurgents. Additionally, the M26 can be detached from the M4, mated with a butt stock, and used independently to shoot from confined spaces such as vehicles and guard posts. The award also provides the Army with the accessories and kit to deploy, maintain, and optimize each shotgun for any combat environment.

Weighing in at just 3.7 lbs and with a snub barrel only 7” long, the M26 is several pounds lighter, easier to maneuver, quicker to shoot, and 100-200% more reliable than the Army’s current pump action shotguns. Additionally, the M26 uses detachable 5-round magazines that allow quicker reloading, adjustable sights for more accurate shot placement, ambidextrous controls for easier use, and a hydraulic butt stock for better recoil mitigation than the current shotguns.

1,900 M26 shotguns have been previously purchased by the Army and are being readied for delivery to combat units in Afghanistan and Iraq. This latest series of Army contracts allow C-MORE to purchase the necessary parts to build 2,500 additional M26 shotguns and smoothly enter Full Rate Production of the weapon this June.

The M26 is the Army’s most thoroughly tested shotgun with over 80,000 rounds fired by Soldiers, engineers, and test experts at Aberdeen Test Center in MD and other test facilities throughout the United States. It has endured temperatures as hot as 160° F down to -50° F, survived grueling endurance exercises, and dominated combat firing events. In the end the M26 bested all other shotguns in the Army’s inventory and now provides our Soldiers a formidable capability firing all the Army’s current inventory of 2 3⁄4” and 3” ammunition such as buck shot, door breaching, and crowd control rounds. It is the only shotgun to ever receive the Army’s highly coveted Type Classification standard indicating that the shotgun was so thoroughly tested that the Army allows it to be used wherever our Soldiers are deployed to defend America’s freedoms.

Read more about this shotgun here.