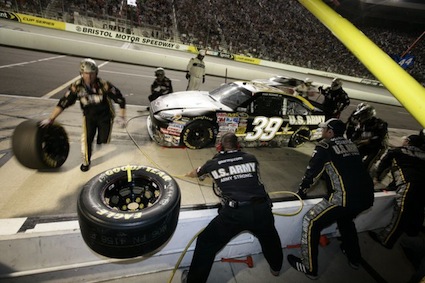 The Army pit crew changes two tires on the Army Chevy Impala following a caution for light rain. After this year, the Army will no longer sponsor a NASCAR team as part of its national branding and accession efforts. But the service will continue other programs to attract new Soldiers and keep itself in the public eye. U.S. Army photo

On Wednesday, the Army announced that it would stop sponsoring Stewart-Haas Racing’s No. 39 Chevrolet driven by Ryan Newman in 2013. The Army allocated $8.4 million in sponsorship spending for this year’s 12-race season.

The Army has been in NASCAR for 10 seasons. In addition to the highly visible Army race car, the marketing with the racing league included interactive kiosks at the track, engagement areas where recruiters could talk to prospects and educational programs in high schools.

Shots fired at police during “anarchy” in Belfast, Northern Ireland