The two Soldiers were primed and pumped to stand on the podium together, but it was almost as if they got ambushed along the way. Richmond finished in 16th place with a score of 131, and Eller was 22nd after shooting a 125.

“It was one of my toughest days ever,” said Richmond, the world’s top-ranked double-trap shooter entering the London Games. “I had a couple of problems with my hold points and missed a lot more first targets than I normally do. I just never got a feel for this range.

“I was chasing my tail all day trying to figure it out and put a run together. The score wasn’t the one I was looking for.”

Hoping to ride the momentum created by U.S. shooters Sgt. Vincent Hancock and Kim Rhode, who both won gold medals in Olympic skeet shooting this week, the USAMU duo came out of the gate slow and was forced to rally from an early deficit. 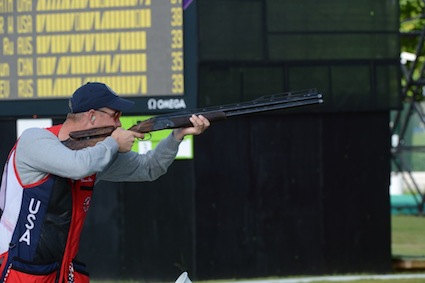 “After my slow start, I came out the second round, had a game plan, and tried to execute it,” Eller said. “But I missed three right out of the gate and at that point if I [shot perfectly] I may have made the final, but when you are down that many [winning a medal] is not going to happen.”

As a four-time Olympian and 2008 gold medalist in the event, Eller said his experience should have been an advantage. He correctly predicted beforehand the exact score he needed to secure a spot in the final. He remained baffled on why he couldn’t dig himself out of the hole.

“I have built myself up a bag of tricks over the years, like ‘if this goes wrong, this is what I have to do to fix it’ and you fix it,” Eller said. “Well, I didn’t have anything in my bag of tricks today. I didn’t know how to get through what was going on.”

The grandstands were packed all day for the star-studded field of shooters. The host nation’s hopes for a gold medal in shooting rested on the shoulders of Peter Robert Russell Wilson, and the local hero did not disappoint. Wilson won the gold medal in front of a raucous crowd, shooting an overall score of 188, following his high qualification score of 143. 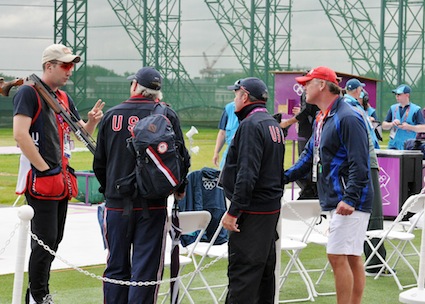 LONDON (Aug. 2, 2012) â Struggling to figure out what was going wrong, SSG Josh Richmond, U.S. Army Marksmanship Unit, talks it over with the coaching staff in between qualification rounds of the Olympic double trap competition Wednesday at the Royal Artillery Barracks shotgun range. Richmond came up short of an Olympic medal, finishing in 16th place in his Olympic debut. (Photo by Michael Molinaro, U.S. Army Marksmanship Unit)

“There has been a fair amount of pressure placed on all of the athletes on Team GB and I really wanted to give it my absolute best,” Wilson said. “All these years during my preparation, nothing else mattered — world cups, world competitions — more than the Olympic Games. Nothing compares to winning in London.”

Hakan Dahlby of Sweden rallied from the sixth spot entering the final to win the silver medal with a 186. Russia’s Vasily Mosin claimed the bronze after winning a shoot-off against Fehaid Aldeehani of Kuwait. They shot 185 in regulation.

Despite being a four-time Olympian, Eller is only 30. Richmond, 26, said there’s no reason both Soldiers should not return to the sport’s grandest stage in 2016 at Rio de Janeiro, Brazil.

“This isn’t the end of the road, it’s just the beginning,” Richmond said. “I have had success in Rio. I won at the Pan Am Games [in 2007] there, and it is a place that I am very comfortable shooting at, so we’ll see what happens in the next four years.

“Overall, I learned quite a bit from this experience. I am definitely going to be a contender for the 2016 Games. I caught the Olympic bug.”