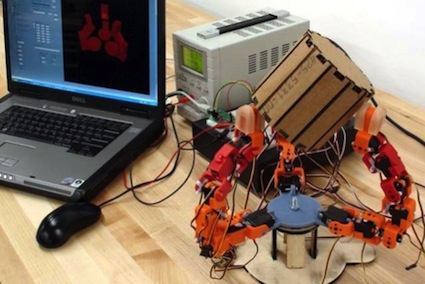 Development of snake-like technology underway at the U.S. Army Research Laboratory is moving the military toward sending more autonomous systems instead of Soldiers on search-and-rescue missions, a top priority in the most dangerous mission areas.

This new work has resulted in the arrangement of the bases of several snakes in a circular array that functions like a team using multiple parts of their bodies to manipulate an object, scan a room or handle improvised explosive devices.

This snake-robot is scalable; it can be built however large or small as a subsystem to a larger platform like iRobot’s rugged system Warrior, which travels over rough terrain and climbs stairs. The number of tentacles or snakes determines the breadth or scope of its search capabilities. The number of links on each of those tentacles supports each snake’s length or reach into an area, as well as its ability to crawl, swim, climb or shimmy through narrow spaces all while transmitting images to the Soldier who is operating the system.

The subsystem comes equipped with sophisticated electronic sensors, among them laser detection and ranging, or LADAR, to render 3-D representations of object shapes and physical properties like faces, mass and center of mass.

“The technology is leading to more than just the very tip of the snake being used in the object manipulation effect,” said Derek Scherer, a researcher who works within ARL’s Vehicle Technology Directorate. “Consider that snakes push off rocks or roots to propel their bodies. We are using this same concept in development.”

Development of snake-like technology underway at the U.S. Army Research Laboratory is moving the…