As they execute national defense missions, the US Armed Forces share an important mantra—leave no one behind. The fact is no American families in recent years have suffered doubts about the fates of loved ones who gave the last full measure for their country. 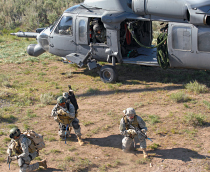 Clearly, the services take this obligation to their members seriously. Combat Search And Rescue (CSAR) units and platforms form a major part of the resources dedicated to those in need. Although every service will act without hesitation as situations dictate to bring troops safely home from danger, the US Air Force has primary responsibility for CSAR missions, with units trained and organized to operate aircraft specifically adapted for this role.

For most people, CSAR evokes a daring helicopter dash behind enemy lines to rescue a pilot who ejected from a stricken jet. The most recent, in fact the only, example of this dramatic situation is Air Force Captain Scott O’Grady’s shoot-down over Bosnia on June 2, 1995.

O’Grady parachuted into Serbian-held territory when a Bosnian Serb SA-6 surface-to-air missile shattered his F-16C Falcon fighter during a patrol flight to enforce the no-fly zone NATO imposed during the Balkans War. For six days, O’Grady evaded capture, hiding in forests and eating plants and insects. The wily pilot deliberately held off signaling for help on his survival radio to avoid detection by patrols monitoring transmission frequencies to locate him. When he called in at 2 a.m. on June 8 to confirm his identity and location, he triggered an immediate response. NATO’s Southern Command geared up to retrieve their aviator as quickly as possible.

Ironically, the unit with primary responsibility for the rescue wanted time to plan O’Grady’s pick-up, necessitating a mission delay, so the 24th Marine Expeditionary Unit, stationed on the amphibious warship USS Kearsarge in the Adriatic Sea, got the call to go immediately. Before 6 a.m., the Marines launched two heavy CH-53 Sea Stallion helicopters, two AH-1W Cobra gunships and two AV-8B Harrier II jump jets from Kearsarge’s flight deck, and an armada of about 40 combat aircraft assembled over O’Grady’s position. In less than an hour, the Marine team picked up the Air Force captain, and despite taking fire from nearby Serbian forces, safely returned to the ship, landing by 7:30 a.m.

Multi-Mission Responsibilities
Since this well executed mission, many more aircraft and aviators have gone down, but none of the situations have approached the intensity of O’Grady’s rescue. CSAR units have nevertheless remained busy, because their mission portfolio extends well beyond flights behind enemy lines. They routinely have engaged in a variety of aeromedical evacuation and other military support operations, counter-drug, NASA support and civil disaster relief and rescue efforts around the globe.

The Pave Hawk fleet has been in service since 1982 with more than a dozen Air Force, Air Force Reserve and Air National Guard units stationed across the U.S. from Florida to Alaska and forward in Europe and Japan. Squadrons have regularly deployed to Iraqi and Afghan war theaters to cover combat units and perform other support missions.

The HH-60G’s configuration has applied well to medium-threat conditions, and its avionics and systems, including GPS, inertial navigation system, Doppler and all-weather radars coupled with automatic flight controls, enable it to avoid detection by flying nap-of-the-earth (NOE) at night. Crews, consisting of two pilots, a flight engineer and two pararescue specialists (PJs), can use NVGs (night vision goggles) and a forward looking infrared (FLIR) system to navigate and operate safely in darkness. The Pave Hawk contains a helo hoist that can handle a Stokes litter to rescue injured aviators. It can defend itself with two crew-served machine guns mounted in side doors, and its counter-measurers include a radar warning receiver, infrared jammer, hover infrared suppression system and a flare and chaff dispenser. Loaded for combat, the Pave Hawk weighs about 22,000 pounds. Cruise speed reaches 120 to 140 knots, unrefueled range is 480 nautical miles (NM), and standard combat radius is about 200 NM, but it can use its retractable in-flight refueling probe and auxiliary fuel tanks to fly farther.

Long service and heavy use in the campaign against terrorism have taken a toll on Pave Hawks, and the Air Force initiated plans to replace these helicopters almost a decade ago. As early as 1999, the Defense Department stated that the HH-60G lacked many capabilities needed to meet current battlefield conditions. In addition to its quickly waning service life, originally estimated at 7,000 flight hours, the deficiencies identified were range, payload and cabin size, survivability, instrumentation, readiness for quick deployment, ability to handle bad weather. Each passing year increases the HH-60G’s performance gaps.

CSAR-X Program
The Air Force started initial planning to replace its Pave Hawks around the same time with an original replacement date set as early as 2004. A shift from Air Combat Command to Air Force Special Operations Command in 2003 added new emphasis on special operations infiltration mission capability to the proposed new CSAR helicopter. This change delayed the procurement program, dubbed CSAR-X, which started in 2005 with a target selection date in 2006. Once established, CSAR-X envisioned a purchase of 145 helicopters with estimated developmental and procurement costs totaling more than $10 billion. The goal was to minimize nonrecurring expenses by adapting an existing platform to meet CSAR mission requirements. A reorganization in early 2006 brought CSAR units back into the Air Combat Command fold, but the competition continued uninterrupted.

Early potential competitors for the new platform were the US-101, an American derivative of the EH-101 Merlin (redesigned AW-101), a large utility helicopter from a consortium between Italy’s Agusta and the UK’s Westland, that had unexpectedly won the US presidential helicopter replacement competition in 2005 after affiliating with Lockheed, and Sikorsky’s H-92 Super Hawk, an outgrowth of the H-60 design with dimensions and performance roughly similar to the 101.

Competitors fought over the usual variables: mission capabilities, size and weight, performance and so forth as the Air Force considered its options. All three entries would clearly outperform the Pave Hawk. Lockheed touted speed and range, modern systems and the versatility of its US-101 platform design in several military missions. Sikorsky could claim only one military customer (Canada) for its Super Hawk, although performance met CSAR standards at reasonable cost. Boeing cited the Chinook’s special operations heritage as well as tandem rotor performance advantages.

Future of CSAR
In the fall of 2006, Boeing’s HH-47 proposal won, generating both surprise and howls of protest from Lockheed and Sikorsky, who quickly challenged the choice in formal filings to the Governmental Accountability Office. A few weeks later, the GAO upheld the protests and recommended that the Air Force to re-compete the program.
The Air Force complied, but the ink was hardly dry on the new CSAR-X program document when Lockheed and Sikorsky protested again, charging the service had not changed evaluation criteria to satisfy GAO concerns. After further delay, the competitors finally submitted amended proposals in the spring of 2008. The Air Force expressed its intent to conduct final proposal reviews by late summer and select the winner before the year’s end, but as of this writing, the program remains unresolved. CSAR-X competition seems destined to continue well into 2009, more than two years after the first competition ended.

Program delay may permit other alternatives already in service to take up the slack. One clear candidate is the CV-22. Air Force Special Operations Command has a requirement for at least 50 aircraft and is likely to request more. The CV-22 has demonstrated capabilities that surpass any of the CSAR competitors, especially for the central mission of pilot rescue behind enemy lines. It may in fact be overmatched for less critical requirements, but the fact remains it is in service now with budget support, and will be on call if the need arises. The same holds true of Marine Corps Ospreys, Army Chinooks and Black Hawks, all of which are undergoing substantive modernization and upgrades.

In any case, the CSAR-X program is emblematic of the difficulties facing the American military procurement establishment as it copes with an increasingly uncertain future.