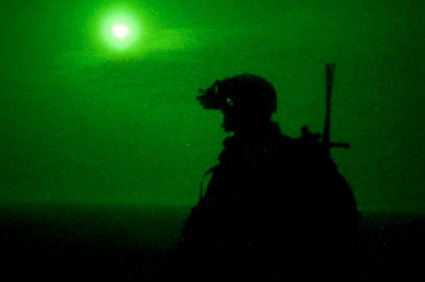 CONTINGENCY OPERATING SITE UBAYDI, Iraq– Since U.S. advise and assist forces began partnering with Iraqi border patrols along the Syrian border in mid-November, instances of smugglers circumventing port-of-entry stations have all but ceased, according to several sources within the Department of Border Enforcement.

Attempts to smuggle contraband across the border berms have been greatly reduced since the Americans showed up, according to Staff Brig. Gen. Dhamin, commander of 15th Brigade.

The Americans bring highly-skilled manpower, armored trucks, night-vision optics and satellite imagery, while the Iraqis bring knowledge of the terrain and local smuggling patterns, said 1st Lt. Pat Barone, whose platoon of paratroopers was conducting nightly operations with the Iraqis north of Husayba.

Barone acknowledged that Dhamin and USF are sharing intelligence, and that Dhamin seemed eager to make the best use of the partnership.

At a border fort near a well rumored to have been visited by Saddam Hussein in his early years just before stealing across the border into Syria, the American troops were assisting DBE forces maintain border security through the night and training with them during the day.

“The idea is to establish patterns of behavior so that, when we leave, the Iraqis will continue to implement successful strategies against the enemy,” said Barone.

Following one of the coldest nights on the border, Col. Salah, commander of 2nd Battalion, 15th Brigade of the DBE, drove to the American encampment to thank them.

“Thank you for leaving your families and staying out here in the cold to help us with this important mission,” said Salah.

Iraqi detainees at the fort – cigarette smugglers trying to take advantage of the high price of tobacco across the border – reported that, since the Americans showed up, even cigarette smuggling has ceased.

“The smugglers know that the Americans are watching from the sky,” said a suspected smuggler detained by the DBE, who preferred to remain anonymous. “The smugglers are afraid.”

After a night of partnered patrolling in the wadis, or dry washes, between border forts in areas suggested by the local Iraqi commander, Barone was very pleased with the performance of the DBE soldiers who accompanied his paratroopers on patrol.

The Iraqi-American partnership goes beyond operations and training, and includes trading food for fuel and recreational soccer and baseball.

“We are so happy to be sharing food, conversation, and training with you,” said Iraqi Staff Sgt. Qasim, who has served with DBE for five years and was busy planning his third marriage. “With you here, the smugglers do not try to smuggle across the border.”

Lt. Col. Ayad, a company commander in the 15th Brigade’s 2nd Battalion, reported that his greatest limitations are manpower and lack of night-vision optics, issues they are working to resolve.

“We can no longer give them equipment like we did in the past,” said Barone, adding that the Iraqis must make their requests from their own government.