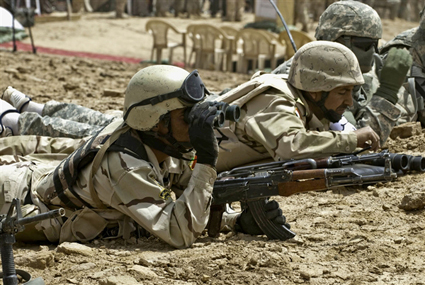 “They did outstanding,” said Maj. Gen. Michael Oates, commander of the U.S. Army’s 10th Mountain Division. “The Iraqi army is here to defend its citizens and protect their borders.”

A platoon of Iraqi soldiers landed near the target area on a mock battlefield in Iraqi air force helicopters to capture fictitious criminals. They moved forward in wedge formations while relying on cover from the terrain.

Acting on a call for fire from Iraqi fire control experts, U.S. soldiers with the 1st Cavalry Division’s “Long Knife” 4th Brigade Combat Team launched Excalibur artillery rounds from about eight miles away, while an Iraqi and U.S. crew fired 120 mm high-explosive mortars from a position adjacent to the air-insertion point.

“It was a good exercise for us,” said Staff Brig. Gen. Jabar, the 10th Division’s deputy commander. “The Long Knife Brigade gave us every kind of support we needed. We have good social and professional relations with the [brigade’s soldiers]. Our soldiers have been trained perfectly by the Long Knives.”

The senior noncommissioned officer operating the mortar teams said his crew has been training their Iraqi counterparts for the majority of this current deployment.

“They’re going in steps, to where we will be observing them doing everything,” said Army Master Sgt. Daniel Pilewski, mortar platoon leader for 2nd Battalion, 7th Cavalry Regiment.

Although the Long Knife soldiers administered the mortars, it was the Iraqis who put the steel on target.

“We are capable and able to defend our citizens and our country,” Jabar said. “We can use cannons and aircraft – it’s just a matter of buying and training on them.”

The training event reinforced the Iraqi army’s capability and instilled confidence in the individual soldiers.

“I feel the security situation is better in our region,” said Pvt. Ali Helal Mayah, an Iraqi soldier. “We have been able to mitigate accidents while becoming a stronger army. This training is making us stronger, and the Long Knife Brigade is giving us new skills.”

The Long Knife soldiers have mentored the Iraqis since just after they arrived in the tri-province area of Dhi Qar, Muthanna and Maysan in June.