The mission – using small craft to reach the deck of German-owned vessel as the crew huddled in a safe room below – ranks among the most dramatic high seas confrontations with pirates by the task force created to protect shipping lanes off lawless Somalia.

The crew managed to kill the engines before taking refuge in an panic room-style chamber, leaving the ship adrift and the pirates so frustrated they started damaging equipment after hijacking the vessel Wednesday, Navy officials and the ship’s operator say.

Lt. John Fage, a spokesman at the U.S. Fifth Fleet headquarters in Bahrain, described the pre-dawn raid as an “air and sea” assault that included Cobra attack helicopters for surveillance and coordination.

Marine Corps officers involved in the raid told reporters in a conference call that the attack involved “overwhelming force” and the element of surprise. Marines were able to separate the pirates and confront them singly or in small groups, while helicopters bore down.

The armed pirates gave up quickly when faced with large numbers of Marines carrying heavier weaponry.

Getting to the crew barricaded behind three walls in a safe room proved to be a quite a challenge, however, and the Marines had to drill through steel walls to reach the suspicious sailors.

Capt. Alexander Martin said the crew was finally persuaded that they were being rescued when a Marine ripped the American flag patch from his uniform and stuffed it through a hole the rescuers had bored in the final steel door.

Martin added that he also spoke to the ship’s captain in Russian.

It was the first boarding raid since the multinational task force was formed in January 2009 to patrol off the Horn of Africa, said U.S. Navy Cmdr. Amy Derrick-Frost in Bahrain. 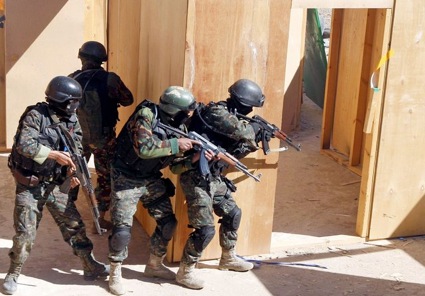