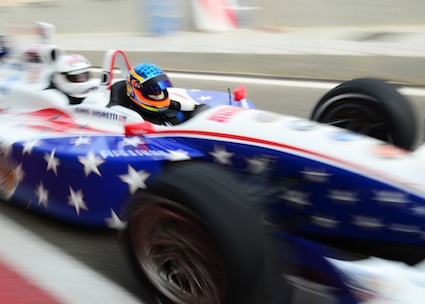 The Indianapolis Motor Speedway will continue its long-standing tradition of honoring the United States military during pre-race ceremonies for the 100th Anniversary Indianapolis 500 on Sunday, May 29, and a first-time event after the race also will pay tribute.

After the checkered flag falls, a special second flyover recognizing the 100th anniversary of U.S. Navy aviation will take place. A formation of U.S. Navy aircraft consisting of one A-4 Skyhawk and a T-2C Buckeye will soar over the track followed by the Navy flyover of four F/A-18E Super Hornets from Strike Fighter Squadrons 105 from Oceana, Va. and 137 from Lemoore, Calif. Representing the Navy at the Indianapolis 500 will be Vice Admiral Al Myers, USN, Commander, U.S. Naval Air Force.

“The Greatest Spectacle in Racing” has paid tribute to the troops since the inaugural event on Decoration Day – now known as Memorial Day – May 30, 1911.

Salutes to the military occupy many special moments during the pomp and pageantry of pre-race ceremonies on Race Day.

Military members march in uniform down the front straightaway. Large American flags have been unfurled in the infield during the performance of the national anthem, and a military rifle team fires a volley to honor fallen comrades. Florence Henderson also traditionally sings “America the Beautiful” to honor America and the troops.

General Peter W. Chiarelli, Vice Chief of Staff, United States Army, will give a speech honoring the U.S. Armed Forces during pre-race ceremonies. Chiarelli also will meet with the 400 service members and approximately 40 Wounded Warriors who will be on hand for the “500.”

Global music superstars and Grammy Award winners David Foster, Seal and Kelly Clarkson will perform the national anthem during pre-race ceremonies for the 100th Anniversary Indianapolis 500 on May 29.

Seal and Clarkson will sing “The Star-Spangled Banner” as a duet, accompanied by Foster on piano. Members of the U.S. Armed Forces will stand at attention beside Foster’s grand piano during the performance.

The traditional flyover during the national anthem this year will feature a Northrop Grumman B-2 Spirit, also known as a “Stealth Bomber.”

Following the national anthem will be one of the most poignant tributes to America’s veterans during pre-race ceremonies when a lone bugler plays “Taps.”

Congressional Medal of Honor recipient Bruce P. Crandall will serve as the honorary starter, waving the green flag to begin racing for the field of 33 drivers.

Retired Col. Crandall, who flew more than 900 missions as a helicopter pilot during the Vietnam War, received the Congressional Medal of Honor – the highest military decoration awarded by the United States government – in 2007.