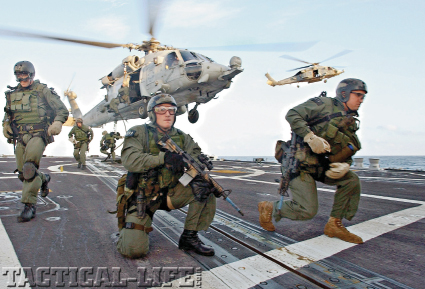 You and three of your teammates are slowly drifting toward earth in a stack formation at 18,000 feet. The air is so thin at this altitude you need an oxygen mask just to maintain consciousness. You’re loaded with 80 pounds of gear, weapons and explosives. Following this extremely difficult HAHO (high altitude, high opening) jump maneuver, you and your team have a 5-mile swim in the open ocean, a little light demolition, a probable firefight and an equally difficult extraction to look forward to. As with most people who find themselves in difficult situations, you start to reflect on what got you here. How does an ordinary man find himself here? The truth is he doesn’t. For you are now part of an elite brotherhood where ordinary men need not apply. An exclusive fraternity comprised entirely of the very best of the best. You are a U.S. Navy SEAL and the only easy day was yesterday.

Special operations are characterized by the use of small units with a unique ability to conduct military actions beyond the capability of conventional forces. SEALs are extremely well trained to operate in any environment but their true mastery is in maritime operations. While SEALs utilize a combination of specialized training, equipment, and tactics, what sets SEALs apart from all other military forces is that SEALs strike from and then return to the sea. SEALs (Sea, Air, Land) take their name from the elements in and from which they operate. Their stealth and clandestine methods of operation allow them to conduct multiple missions against targets where larger forces cannot approach undetected.

The Journey Begins
For most recruits, the journey begins in boot camp where the Navy attempts to transform the masses into sailors. For those with an eye on the most coveted breast insignia in the Navy, the true test begins on a beach in Coronado, CA at BUDS (Basic Underwater Demolition School).

Of these candidates, only a select few will ever wear the Trident and recite the words of the SEAL creed beginning, “In times of war or uncertainty there is a special breed of warrior ready to answer our nation’s call. A common man with uncommon desire to succeed. Forged by adversity, he stands alongside America’s finest special operations forces to serve his country, the American people, and protect their way of life. I am that man,” and ends with “I will not fail.”

SEAL training is brutal. It takes more than 30 months to train a SEAL to the point at which he will be ready for deployment. SEALs that emerge are ready to handle any task they could be called on to perform, including diving, combat swimming, navigation, demolitions, weapons, and parachuting. The training pushes them to the limit both mentally and physically in order to weed out those who may not be able to successfully complete the demanding missions and operations with which they face.

The BUDS Barricade
BUDS is widely believed to be the most arduous indoctrination the U.S. military has to offer. So much so that the failure rate among its recruits hovers around 70%. Only one in five succeed. From a pool of young men who believe they are worthy to wear a Trident, only 30% will see their dream realized. Some will see their hopes die when either their body or their mind will no longer allow them to continue while others are dropped for poor performance, attitude, injury or illness.

Although one has to be in superb physical condition to have any chance at surviving “Hell Week,” strength and endurance will only get you so far. What separates the men from the SEALs is their mental capacity.

“No amount of work-outs can prepare you for Hell Week,” said Todd (real name withheld), a 15-year SEAL operator. “At some point your muscles are going to break down, and all you have to rely on is your mental approach and the strength you draw from the guys in your boat crew.”

During this week, candidates endure 5-1/2 days of continuous training, with a maximum of 4 hours sleep. Designed as the ultimate test of one’s physical and mental motivation, Hell Week proves to those who make it that the human body can do 10 times the amount of work the average man thinks possible.

Underwater Warriors
Diving phase (8 weeks) trains and qualifies SEAL candidates as basic combat swimmers. During this period, physical training continues and becomes even more intense while concentrating on combat SCUBA. Emphasis is placed on long distance underwater dives with the goal of training students to become basic combat divers that use swimming and diving techniques as a means of transportation from their launch point to their combat objective.

It is after successful completion of SQT that trainees are given their Naval Enlisted Code and awarded the SEAL Trident. Although they are now officially Navy SEALs, this is not the end of training. New SEALs report to their operational units and begin 12 to 18 months of extensive individual, platoon, and squadron level training in preparation for deployment with their SEAL platoon. The integration of a newly minted SEAL into an actual team is not an easy process. SEAL platoon-level training programs are no less intense than the trials it takes to get them there.

“Fire In The Gut”
Contrary to popular belief, SEALs are not supermen, at least not in the sense that they are all 6’4” physical specimens. And while some certainly do fit that category, many appear to be no more viable a candidate than the next man. Although there is no true measure in which one could accurately predict a candidate’s success, one former Naval Special Warfare commander referred to it as the “fire in the gut” syndrome. This  attribute cannot be precisely defined, but in the aggregate it includes courage, desire, oblivion to pain, obedience to instructors, cooperation with fellow trainees and the attitude of, “Graduation’s out there somewhere and there’s no way I’m not going to be around when it happens!”

The life of a Navy SEAL is a never-ending cycle of training, missions, deployments and more training, all designed to produce the most efficient and effective warriors the world has ever seen. Navy SEALs stand together, forever at the ready, to protect the virtues of freedom and democracy.