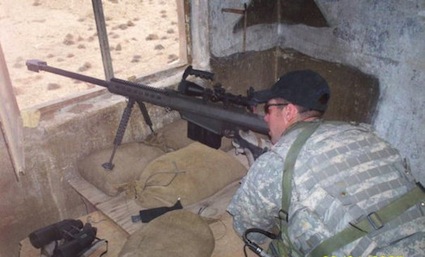 It would be just one shot.

Watching the Iraqi insurgent walking along the canal, Sgt. Brandon McGuire and his four-man sniper team knew that.

They had lain hidden for two days and two nights. On the third morning, when they observed the man uncovering a mortar, they knew, yes, he was the one, the insurgent who was very good with his weapon, having killed and wounded Americans and Iraqi civilians with it.

The shuddering kites flown by kids nearby showed the wind was stiffening. Sometimes nearly obscured by dust, the Iraqi kept walking — just a little under a mile away.

McGuire was very good, too. The barrel of his Barrett .50 caliber Weapon Sniper System shifted imperceptibly, the Iraqi’s robes swirled in his scope, his finger squeezed ….

The shot will echo tonight on the History Channel’s program “Sniper: The Deadliest Mission.”

The 32-year-old soldier from Olathe and his family will be in the living room at his Fort Polk, La., home. On their big screen, the stories of the deadly skill of McGuire and other snipers will be told, other “million dollar shots.”

It was April 2007. McGuire had been in Iraq nine months, the last two days hidden in an old shed waiting and watching the road and the canals nearby. The road was called “IED Alley” for the obvious reason. It was known as a “black” road, meaning American troops were not allowed to use it without special clearances

It would be just one shot. Watching the Iraqi insurgent walking along the canal,…