Several members of the U.S. Army Marksmanship Unit showcased the very best of Soldier skills recently as they competed and won at national shooting championships across the country.

Members of the Shotgun platoon started things off by meeting their lofty expectations at the USA Shooting National Shotgun Championship June 26-July 2 in Colorado Springs. Sgt. Jeff Holguin withstood the intense competition amongst his USAMU brethren to claim the gold medal in Men’s Double Trap. He beat out Staff Sgt. Josh Richmond, ranked number one in the world, and Sgt. Glenn Eller, a 2008 Olympic Champion, to win the gold.

“It was awesome to win my second national championship,” Holguin said. “It also qualifies me for the Pan American Games later this year in Mexico.”

Sgt. Vincent Hancock once again defended his title in Men’s Skeet, earning a gold medal for the third consecutive year. The 2008 Olympic Champion led after the first round and never looked back.

In Men’s Air Rifle, Cpl. Matthew Rawlings came away with the gold medal, also ensuring that he will represent the U.S. at the Pan Am Games along with Parker. 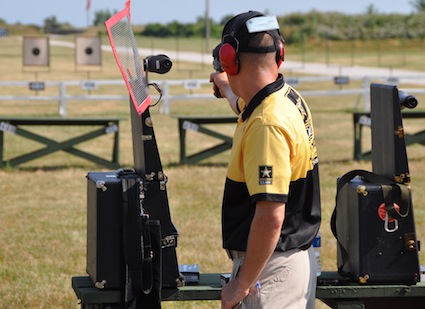 CAMP PERRY, Ohio — At the National Trophy Individual match, Sgt. 1st Class Thomas Rose, a member of the International Pistol platoon, went back to his roots and came out a winner after finishing with the high score. Rose hadn’t shot at an outdoor pistol match in six years.

“The Army uniform and the USAMU black hat remain a ‘Symbol of Strength’ at an American tradition, the National Matches,” said Lt. Col. Daniel Hodne, commander, USAMU. “When the USAMU is on the firing line, our unit’s and our Army’s expectations are that they will showcase the very best of Army Soldier skills. Winning is not our mission; it is expected.”

At Camp Perry, Ohio, members of both the USAMU’s Service Pistol and International Pistol platoons won a number of matches and swept the coveted team championships July 11-18 at the National Pistol Championships.

U.S. Army Blue won the “Coming Through the Rye” Trophy as the overall four-man team champions after three days of strong competition. Competing in center fire, .22- and.45-caliber pistol matches the team of service pistol shooters Sgts. 1st Class James Henderson and Gregory Wilson, and Staff Sgts. Lyman Grover and Patrick Franks beat out the second place team by one target to claim their second straight title and third for the Army since the inception of the trophy. Henderson, a two-time National Champion, placed second in the overall individual category.

On July 18, U.S. Army Blue won the prestigious Gold Cup Trophy for the fourth consecutive year. The trophy, in existence since 1920, is given to the winners of the National Trophy Team Match. Firing members were once again Henderson, Wilson, Grover and Franks.

In the National Trophy Individual Match, Rose, a member of the International Pistol platoon, went back to his roots and came out on top after finishing with the high score. 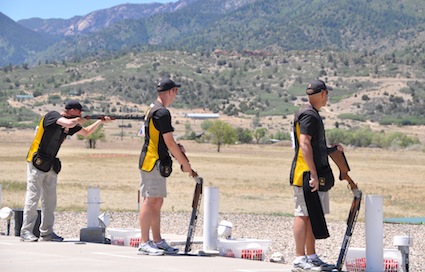 “Shooting International Pistol the last six years has honed my skills to shoot slow-fire better, and with my experience as a service pistol shooter initially, the two combined to work perfectly,” Rose said. “I couldn’t have asked for a better result.”

The National Championships culminate the competition schedule for the Service Pistol platoon, who now turns its attention to its main mission of conducting marksmanship training courses provided for Soldiers throughout the Army.