by Fred Demara
in Guns, Rifles
0

0
SHARES
44
VIEWS
Share on FacebookShare on Twitter
Although no longer a “new” design, the .22-caliber AR-7 is still leading-edge modern and fills a compact survival role that no other rifle does.

Though Henry rifles were considered “tactical” during the War Between the States, since then, they’ve become classic collector’s rifles. Successor Henry Repeating Arms has earned their spurs in the gun arena with quality revivals of those rifles you wanted as a kid but didn’t have money for until they had become “collector” guns—mostly lever-action repeaters in pistol calibers—all proudly American-made.

The common thread to Henry’s modern iterations and the U.S. Survival AR-7 rifle is that, like their handy lever-action rifles, it’s another design just too good for Henry’s visionaries to leave out of production.

Bailout Rifle ABCs
As rifles go, the AR-7 was a special-purpose tool intended primarily as a bailout rifle for foraging and very light defense by downed pilots, and its handiness and overall reliability have kept it a favorite among those who frequent the bush for purposes other than hunting. It has been issued for special missions, but in the role for which it was designed. Only Hollywood has the technical expertise to turn the .22-caliber AR-7 into a general-purpose anti-personnel/anti-tank/anti-aircraft weapon.

Although the .22 LR is a lowly meat-for-the-pot round, it has been made in tracer and chem/bio hollow points, so one could surmise without telling any secrets that because of its compact dimensions the AR-7 would be a logical platform for such mission-specific rounds in a tactical setting. The AR-7 has served ably as a USAF bailout survival rifle, and in a modified form with the Israeli Air Force.

At less than a yard long assembled and barely more than 16 inches long stowed, the AR-7 is an easy rifle to carry in a hunting pack, under the seat of your plane or ATV, or in the trunk of a patrol vehicle for public-safety issues from street lights to injured or diseased animals. As a permanent component of a field pack, its 2.25-pound weight can make you forget it is there.

Few people head for wild country with the certain knowledge they will have to survive with what they are carrying, but next to attitude and training what determines whether they will come back is the quality of their gear. If that contingency gear includes a firearm, the AR-7 would be at the head of our list—the .22 LR that you have with you trumps the .223 that you do not. 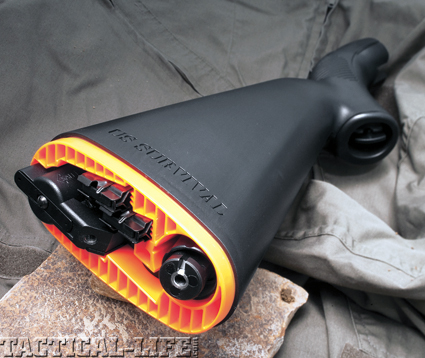 Not only does the rifle break down fully, but the receiver, barrel and spare magazines fit in the stock for a compact, floating tool just in case.

The salient feature of the AR-7 is that the barrel and action readily come apart and stow in the stock, similar to various European stocked pistol designs. The AR-7’s added benefit is that this stock with the rifle stowed inside will float, and the assembled stock will keep the rifle afloat if you drop it in the drink.

When originally designed in the late 1950s by Eugene Stoner, the AR-7 was one of the first rifles to take advantage of modern materials and manufacturing techniques. The receiver was, and still is, of aircraft-grade aluminum. Then it was anodized, now it is Teflon-coated. The original barrel was aluminum with a steel sleeve. Now it is steel, with a bonded jacket of ABS and a Teflon coating—not a bad compromise when one considers potential problems with bimetallic corrosion. The original synthetic stock has been upgraded to ABS, a synthetic that is not only plenty strong for the purpose at hand, but one that also has a tough resilience, making it very impact resistant. 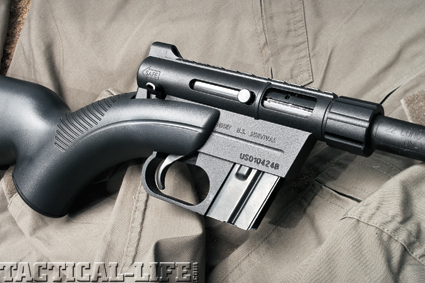 The latest AR-7 is an intelligent design combination of synthetics, steel and aluminum alloys—all made in the U.S.A. by Henry Repeating Arms.

To put the rifle in service, the synthetic butt-cap is pulled off, and the rifle action and barrel are withdrawn. The action is secured to the stock via a long, captive thumbscrew, inserted up through the pistol grip. The barrel is secured to the action with a knurled, threaded ring. The butt-cap is replaced, a loaded magazine inserted, the charging handle is withdrawn and pulled to the rear and released, and firing can commence. Assembly is simple and intuitive; disassembly for stowing is in reverse order. One form-follows-function feature that first-timers notice is that the action sits in the stock slightly offset to the right, done to provide storage room inside the stock. 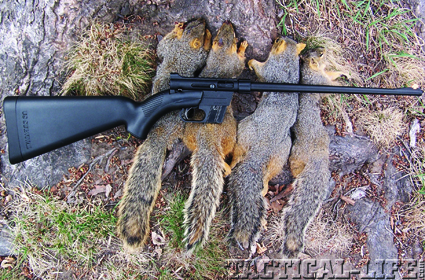 The AR-7 is a great critter getter, and .22 rounds are inexpensive, lightweight and won’t destroy tree rats.

The drift-adjustable front sight is a fixed blade of blaze-orange synthetic. The rear sight is adjustable for elevation by loosening one screw, and it may be rotated 180 degrees for a large ghost ring or a finer peep aperture. For those of us trained to get on target with the front sight first and to use peep sights, this combination and the rifle’s muzzle lightness made it a handy tool for picking up and harvesting squirrels overhead.

Operation of the AR-7 is straightforward and common to most others of the type. The safety rocks forward to fire, rearward for “safe.” The magazine release is inside the triggerguard, where it is easily pressed with the thumb while your fingers withdraw the magazine. The single-stage trigger was not light, but was crisp and smooth. An empty magazine does not hold the bolt open.

Certain earlier iterations of the design had eccentricities and gotchas—hand-fed rounds of .22 short would stove-pipe or not eject, and old, regular-speed .22 LR did not cycle reliably—but these semi-endearing traits appear to have been all worked through, as there were no assembly issues, nor any operational failures we did not purposely induce in the field test. 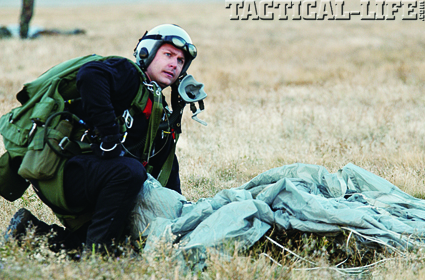 Originally designed for downed pilots, the AR-7 is a dependable harvester of food when your survival depends on it.

Like many auto-loading .22 rifles, the AR-7 prefers .22 LR high-velocity loads. Find the brand/load yours likes and stick with it. Our test rifle liked CCI Stingers. Some earlier models gained a reputation as being finicky about ammo and caused feed jams, usually traced to blunt-nosed ammo, or a magazine that had been dropped, as the feed ramp is actually part of the magazine. The current AR-7 rifle as upgraded and made by Henry was not prone to these problems when fed the ammo it liked.

Although our test rifle functioned fine with several .22 loads, as expected, it did show better accuracy with some brands than others in off-hand tests, and was essentially trouble-free with CCI Stingers. We fired a 50-round box each of several brands and cleaned the rifle between boxes. There were no failures to fire a chambered round. It’s a hoot to shoot a lot. It’s also a light, easy carry at 2.25 pounds, although provisions for a sling would make it even handier. Even a couple attachment points for some 550 cord would leave your hands free in the field. One colleague thought it might benefit from a belt frog, as on a Mauser pistol stock.

The AR-7 was not designed as a target rifle, although Henry’s new model does have a handily grooved top receiver for mounting a scope. Among the circle of friends to whom we passed it for reaction, one did mount a scope and reported it would group 1.5 to 2 inches at 50 yards, also with CCI Stingers. As the raison d’etre of the AR-7 is that it fits inside its stock, we probably would not mount a scope. Within the limits of an old soldier’s fading eyes and the issued sights, the Henry AR-7 showed acceptable accuracy within the lethal range of the .22-caliber round. As a survival gun, I doubt if I personally could see a squirrel past 40 yards or so, in which case the fine peep worked just fine.

Clever design, insightful engineering, quality manufacturing in the U.S.A. Overall, we’d say you can put your American Express card back in the drawer. Don’t leave home without your U.S. Survival AR-7.