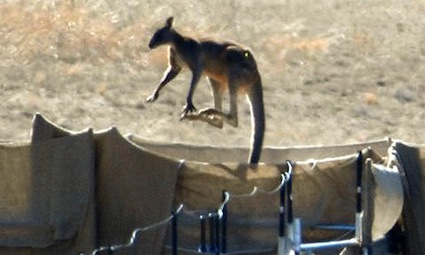 A kangaroo tries to jump out of the culling pen at a previous cull at a military base near Canberra. Photograph: Graham Tidy/AFP/Getty

President Obama and Australian Prime Minister Julia Gillard on Wednesday announced that the US military will begin a permanent presence Down Under — part of a greater Obama administration strategy to contain the rise of China in the Pacific.

By mid-2012, a company-sized rotation of Marines, between 200-250, will be stationed at an Australian military base in the Northern territory. That will ramp up to a full force of 2,500 Marine personnel as part of a Marine, Air, Ground Task Force. 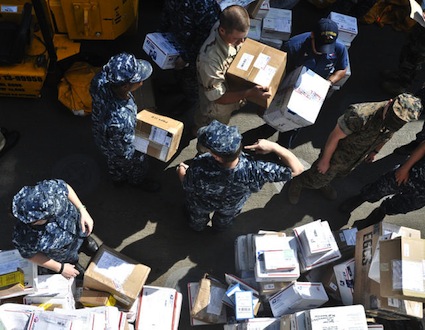 U.S. Sailors and Marines onboard the amphibious transport dock ship USS Cleveland (LPD 7) sort mail on the flight deck of the ship during Pacific Partnership in Darwin, Australia, June 8, 2011. Pacific Partnership is an annual deployment of forces designed to strengthen maritime and humanitarian partnerships during disaster relief operations, while providing humanitarian, medical, dental and engineering assistance to nations of the Pacific. (U.S. Navy photo by Kristopher Radder/Released)

In addition, the US Air Force will be able to use Australian Air Force facilities significantly more than it does now.

“This rotational deployment is significant because what it allows us to do, is to not only build capacity and cooperation between our two countries, but it also allows us to meet the demands of a lot of partners in the region that want to feel that they’re getting the training, they’re getting the exercises, and that we have the presence that’s necessary to maintain the security architecture in the region,” the president said at a joint press conference at the Australian Parliament. 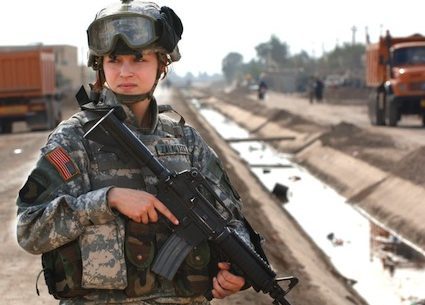