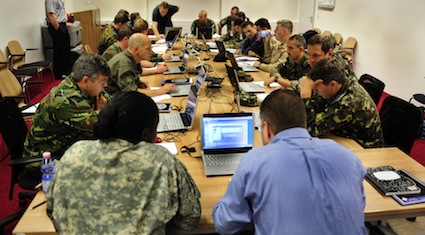 The Pentagon has adopted a new strategy that will classify major cyber attacks as acts of war, paving the way for possible military retaliation, the Wall Street Journal reported on Tuesday.

The newspaper said the Pentagon plans to unveil its first-ever strategy regarding cyber warfare next month, in part as a warning to foes that may try to sabotage the country’s electricity grid, subways or pipelines.

“If you shut down our power grid, maybe we will put a missile down one of your smokestacks,” it quoted a military official as saying.

The newspaper, citing three officials who had seen the document, said the the strategy would maintain that the existing international rules of armed conflict — embodied in treaties and customs — would apply in cyberspace.

It said the Pentagon would likely decide whether to respond militarily to cyber attacks based on the notion of “equivalence” — whether the attack was comparable in damage to a conventional military strike.

Military members from all over the world participate in Cyber Endeavor, a side exercise…