WASHINGTON– U.S. soldiers could remain in Mosul, Iraq, past June 30, when Iraqi forces are scheduled to assume full security responsibilities for the entire country, a senior U.S. military commander in the area said today.

The deadline is part of the U.S.-Iraq agreement that took effect Jan. 1. It calls for U.S. troops to end major combat operations in Iraq and withdraw from cities and urban areas into a solely supportive role of Iraqi forces.

In Mosul, however; al-Qaida in Iraq continues to carry out terrorist attacks fairly regularly, despite months of relative calm throughout the rest of the country during the past year, the colonel said. Though violence and attack levels have decreased “significantly” in and around the city, insurgents there still have the ability to conduct “some high-profile attacks,” he said.

Earlier today, Volesky said, he attended a memorial service for five of his soldiers who were killed April 10 by a suicide truck bomber. The attack was the deadliest in Iraq in more than a year. A reported nine Iraqis were killed and another 30 or more were wounded.

“These operations we have done have not come without cost,” he said, referring to a month-long “clearing” operation his brigade is currently conducting. “We have memorialized five of our great Americans this morning. [Al-Qaida] does have that capability. However, overall these attacks and their effectiveness are continuing to decline.”

Volesky said insurgents in Mosul have two choices: “They can fight or flee.” He added that in the areas his unit has cleared, attacks are rare. Local residents are taking charge of their neighborhoods, and Iraqi army and police are perceived as the main security effort there, he said.

“The more neighborhoods we clear, the less freedom of movement [insurgents] have,” he continued. “I am cautiously optimistic. There could be bad days ahead, as the enemy realizes that his freedom of maneuver and movement has been reduced.”

But, Volesky said, he remains confident in his Iraqi counterparts. He compared Iraqi forces during his previous deployment to Iraq in 2004 to now and called the Iraqis “100 percent” improved. The 25,000 Iraqi soldiers and policemen in his area of responsibility conduct independent operations daily and actually take the brunt of insurgent attacks in the city, he said. “Insurgents have focused their attacks on the Iraqi security forces, and the Iraqis have not wavered at all,” he added.Iraqis, for the most part, continue to lead the security effort there, with help from U.S. aviation, engineer and intelligence assets that the Iraqi military can’t provide themselves, Volesky said, but the Iraqis forces are doing well with what they have.

“They’re all in the lead right now,” Volesky said. “I don’t own a base, and I coordinate all of my operations with them. So, they’re doing those things today that we expect them to do when we eventually leave.”

Still, the insurgency in Mosul is complex Volesky noted, but he said he remains optimistic about the progress Iraqi security forces are making. Security forces are better in some neighborhoods than in others, while al-Qaida and other insurgent groups want to remain “viable” to their cause, he explained.

These, he said, are the issues he and other U.S. military leaders and Iraqi officials are taking into consideration as the need for U.S. forces in Mosul after June 30 is determined. The choice for U.S. troops to stay past the agreed-upon deadline is Iraq’s to make, he said.

“If the Iraqi government wants us to stay, we will stay,” he said. “But again, it’s the Iraqis’ decision; it’s not mine. If the Iraqis invite us to stay, we’re going to stay and continue to support those operations that keep the quality of life improving and the security getting better in Mosul.” 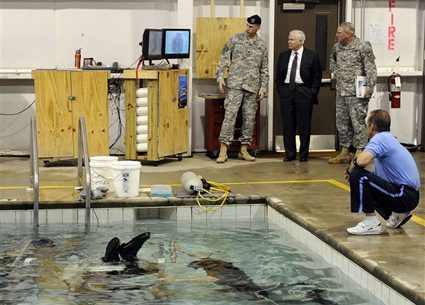 WASHINGTON– U.S. soldiers could remain in Mosul, Iraq, past June 30, when Iraqi forces…