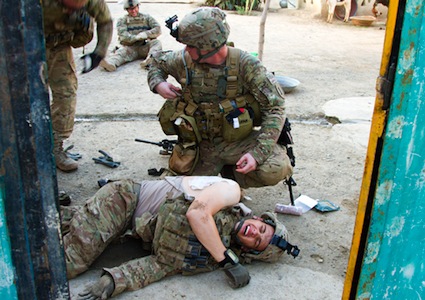 Specialist Brendon Karlsson-Tuttle is treated after being wounded in a grenade attack on Aug 15, 2011. Click the image above to view photographs of the patrol in Sabari district, Khost, province. Photos by Bill Ardolino/LWJ.

The first explosion rocked Combat Outpost Sabari at about noon. A 107-mm rocket fired from the southwest arced over the base and detonated into a road 30 meters beyond the wire. It was immediately followed by a recoilless rifle round from the northwest that plowed into the hill in front of the base, and the rhythmic thump of an American .50 caliber machine gun returning fire. Afghan and American soldiers in three guard towers shot back at the source of a flash and smoke trail from the enemy recoilless, a ridge about 80 meters to the northwest.

The crackle of additional M-4 rifles and a .240 medium machine gun joined in from the guard towers, while booming thunks began to echo from an Afghan Army Dishka machine gun on the summit of a hilltop observation post above the valley. Despite the suppressive fire, two more rockets streaked into the base from the southeast. One exploded at the foot of one of the guard towers, while a second skipped off the roof of a building and failed to detonate as it broke into pieces that peppered a nearby civilian bazaar.