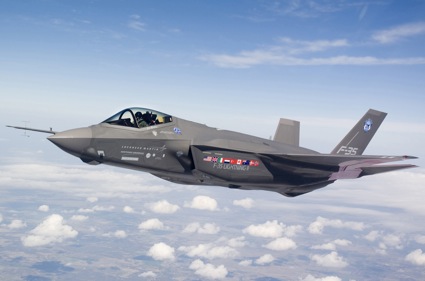 F-35 Joint Strike Fighter Lightning II test aircraft AA-1 undergoes flight testing over Fort Worth, Texas. An airborne networking team at Hanscom Air Force Base, Mass., is working to connect low-observables aircraft such as the F-22 Raptor, F-35 and B-2 Spirit with each other, and with the rest of the force. (Courtesy photo courtesy)

“We’re going to put them in the hands of the fleet and the Air Force is going to be operating [Conventional take-off and landing aircraft] in training at Eglin before the year ends,” Venlet told a luncheon hosted by the National Aeronautic Association.

However, because it is unusual for an aircraft to be delivered to line pilots before formal operational testing is complete, Venlet said that the program will conduct an abbreviated informal test prior to handing over the new fighters.

“It’s not a full operational test, it doesn’t resolve any measures of effectiveness,” he said.

13 killed in Mexican border city in less than 24 hours.