In showcasing the U.S. Army and the very best of Army Soldier skills, Soldiers from the U.S. Army Marksmanship Unit are expected to win regardless of the competition around them. Since joining the unit in 2006, Staff Sgt. Daniel Horner has embodied that notion and worn it on his sleeve.

Horner is a member of the unit’s Action Shooting team and in the sport of Multi-gun shooting there is Horner and then there is everybody else. Horner recently won his fourth consecutive United States Practical Shooting Association Multi-gun National Championship in Las Vegas and his fifth overall.

“A champion expects to win every match,” said Horner. “A winner goes to compete and see how it turns out. Sometimes he wins, sometimes he doesn’t. A champion goes to a match and tells everybody to start engraving the trophy, because it’s mine.”

Shooting was in Horner’s blood from the very beginning, being handed a hunting rifle by his father at the age of six and competing in his first action pistol match at the age of 12. The Suffolk, Va. native saw the sport of Multi-gun shooting taking off and gave it a try.

“I went out to a match with some friends and it was a lot more fun than straight pistol competition,” he said “We saw it as a very fast-growing sport so we kind of envisioned it as the best way to go for the future.”

He won a few pistol championships and some of the bigger multi-gun matches around the country. Then in 2006 Horner enlisted in the Army and became a member of the USAMU. 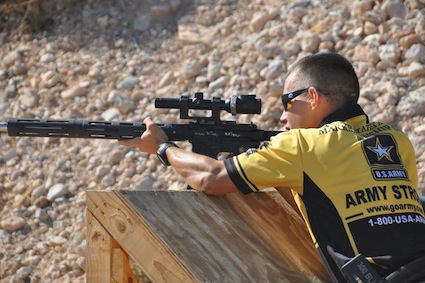 “The whole lifestyle at the unit is positive,” Horner said. “The resources here make it much easier and the team helps me more than anything. They watch me and I can compete against top-quality shooters on a daily basis instead of going out and shooting by myself not really knowing how I did.”

A year after joining the Army, Horner won the first of his five national titles. In fact, he has won the title every year since enlisting except for one year when he didn’t compete due to the demanding Army Soldier of the Year process after winning TRADOC Soldier of the Year.

“Our champions are Soldiers first and members of the U.S. Army, the greatest team on Earth,” said Lt. Col. Dan Hodne, USAMU commander. “Our Army expects our Soldiers to be the absolute best – always. Winning is what champions do, without having to be told to do so.”

Excellence on the range has enabled Horner and his teammates to thrive when it comes to instructing other Soldiers in marksmanship proficiency. Soldiers from Special Forces, Ranger, and regular Army units repeatedly request the assistance of USAMU Soldiers prior to deploying to combat.

“I get a lot of satisfaction out of that,” Horner said. “I really like teaching Soldiers and guys getting ready to deploy.”

The fundamentals Horner uses in his sport–rapid fire engagement, engaging targets at varying distances, engaging moving targets, shooting in alternate positions and weapons manipulation—relate to the teaching points he uses to instruct other Soldiers.

“We don’t tell them how to get to the target because they already know how to do that,” Horner said. “Once they recognize the threat, we instruct them on how to engage it and neutralize it as quickly as possible, regardless of the distance.”

Only 25-years-old, Horner finds himself as the old, wily veteran on a very young team. He was the first one from the team to volunteer for deployment to Afghanistan when the unit began sending cross-functional teams to teach marksmanship to Afghan Soldiers. As the standard bearer in the sport teammates look to him for guidance. Horner said he relishes their camaraderie and pushes them to be at their very best even if it means knocking him off his pedestal along the way.

“Spc. Tyler Payne won in West Virginia last year and is one of the very few people who have beaten me since 2007, and I was so happy for him,” Horner said. “I always want to win, but if for some reason I get beat it better be by one of my teammates. I want them to win just as much as I want to win.”

Besides his national championship, Horner has also dominated both 3Gun Nation Matches in 2012. There are still Soldiers to train. He wants to go to Ranger School and Airborne School in the near future. He and his wife Joanna may be ready to add to their family a few years down the road. But today he is poised to continue his superiority in the sport for years to come, vowing to compete “forever.”

“I just simply love to win,” he said. “I don’t feel any pressure out there. This is too much fun. The Army has helped me mentally as much as physically and I will continue to go to matches expecting to take home that trophy every time.”