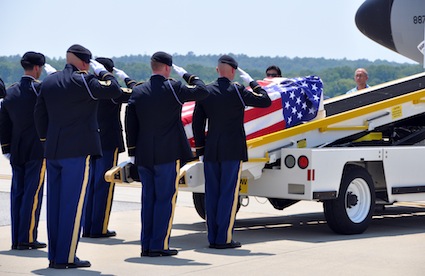 FORT BENNING, Ga. — Soldiers from the U.S. Army Marksmanship Unit place the casket of Sgt. 1st Class Jason Sargent on a belt at Lawson Army Airfield in preparation for his final flight home to his native Maine. Sargent, 39, passed away June 25 after a courageous fight against a terminal illness. He is survived by his wife Cindi and three children: Nicholas, Andrew and William.

The Fort Benning community said goodbye to one of its own Thursday.

In a ceremony at the Main Post chapel, Soldiers, Family members and civilians gathered to pay their final respects to Sgt. 1st Class Jason Sargent, who lost his courageous battle against a terminal illness June 25.

Sargent, 39, was a member of the U.S. Army Marksmanship Unit for more than five years. He was a decorated member of the Service Pistol platoon as a member of several championship teams and earned several accolades including the Distinguished Pistol Badge and the President’s Hundred tab. He also was the lead instructor in numerous close quarters marksmanship training courses, which raised the combat readiness of thousands of Soldiers.
In 2010 he was named the noncommissioned officer-in-charge of the unit’s International Pistol platoon, tasked with preparing Soldiers in their pursuit of the 2012 Olympic Games while they simultaneously train Soldiers and showcase the Army.

“What I admired most about Jason was his caring leadership and his utmost consideration for others,” said Lt. Col. Daniel Hodne, commander, USAMU. “I personally selected him to lead. He had the ability to draw the best out of people who already thought they were the best.” 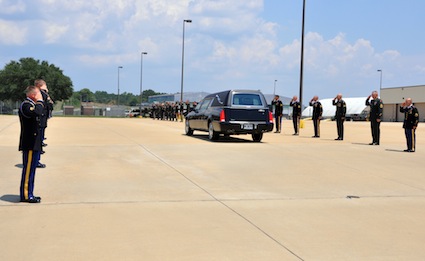 FORT BENNING, Ga. — Soldiers from the U.S. Army Marksmanship Unit render a final salute at Lawson Army Airfield for Sgt. 1st Class Jason Sargent as his body is prepared to be flown back to his native Maine. Sargent, 39, passed away June 25th after a brave fight against a terminal illness.

Born in Bar Harbor, Maine, Sargent enlisted in the Army in 1993 after graduating from Ellsworth High School of Ellsworth, Maine, in 1990 and studying professional aeronautics at Embry Riddle University. His initial assignment was at Fort Rucker as an aerial observer with the 229th Attack Helicopter Regiment. He also served in Korea with the 2nd Infantry Division and at Fort Carson with the 3rd Armored Cavalry Regiment before his first assignment with the USAMU. He served in the Army Reserves before returning to active duty and the USAMU in 2008.

In 2003, Sargent volunteered to serve a combat tour in Afghanistan in support of Operation Enduring Freedom as the Combined Joint Task Force-180 CJ3 Aviation NCOIC.

Sargent, who loved to fly planes and was an avid golfer, leaves behind his wife Cindi and three sons: Nicholas, 15; Andrew, 13; and William, 5.

“Sgt. 1st Class Sargent was a true and loyal friend, and he loved his family more than anything,” said Sgt. 1st Class Gregory Wilson. “He would go out of his way to help you if you needed it.

“He was a true ‘Mainer’—his goal was to retire back to Maine with his family.”

“Although his time on this Earth was cut short, his impact on each of us will last the rest of our lives,” Hodne concluded. “Let us live by Jason’s example, let us make each day count, and let us live with a sense of the profound impact we can all have on each other.”