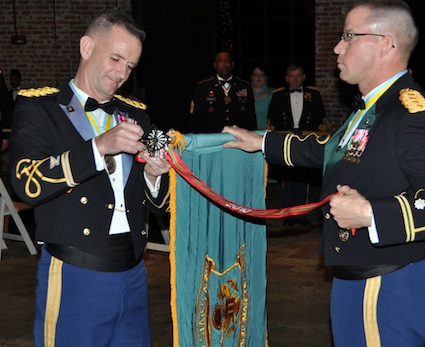 FORT BENNING, Ga. — Col. (P) Walter Piatt (left), commadant, U.S. Army Infantry School, attaches the Army Superior Unit Award streamer to the unit colors of the U.S. Army Marksmanship Unit Jan. 28 as Lt. Col. Dan Hodne (right), commander, USAMU, looks on. The award is the first one of its kind for the USAMU, which was awarded by the Army for the its distinguished and exemplary peformance in 2010.

Even for the “Home of Champions,” the Army’s prestigious Marksmanship Unit where achieving the highest degrees of sustained excellence is expected, 2010 proved to be a year like no other, marked by historic firsts and bests.

Volunteering to embark upon its first sustained deployment of unit personnel since Vietnam and its first effort to train indigenous Soldiers; greatly expanding its marksmanship training program; and showcasing the very best of Army Soldier skills at unprecedented levels in marksmanship competition, winning an unparalleled 27 championship titles in world, national, and interservice matches are just some of the accomplishments made by the Soldiers of the U.S. Army Marksmanship Unit in 2010, earning the Army Superior Unit Award, a first for one of the military’s most unique units.

“This unit has made a profound and lasting impact on the readiness of the war fighter,” said Col. (P) Walter Piatt, commandant, U.S. Army Infantry School. “In earning the Superior Unit Award, it reflects the readiness and relevancy that the (USAMU) brings to the Army. The contributions of this generation of Soldiers in our Army in Iraq and Afghanistan and their success have been in large part due to this unit and how they have instilled readiness throughout our force.”

The unit distinguished itself for extraordinary accomplishments in raising the Army’s overall combat readiness through outstanding devotion and superior performance in executing its wide-ranging mission. 2010 also saw a continuation of its nearly half-century tradition of leaving its stamp on the Army’s precision long-range small arms. With its proven track record of the M21 and M24 sniper rifles, the USAMU Custom Firearms Shop enabled its rapid provision of technical and user evaluation feedback that assisted the Army in adopting a new sniper weapon system capability.

Its Squad Designated Marksman Rifle emerged as the unanimous top choice during the Maneuver Center of Excellence Rifleman Configuration Study. To add to these achievements, the unit coached, mentored, and produced the 2010 Army Soldier of the Year, who also served as the Army’s first-ever female Soldier to earn this prestigious title.

“This unit’s efforts to obtain the highest degrees of precision and accuracy in world-class marksmanship competition directly translate to our efforts in raising Army marksmanship proficiency and supporting broader Army small-arms research and development initiatives,” noted Lt. Col. Dan Hodne, USAMU Commander. “When it comes to all aspects of marksmanship, our Army needs and expects us to be the absolute best in the world.”

The unit continues to aspire to new heights and expectations. In 2011, the USAMU hosted the first International Paralympic Committee World Cup to ever take place in the entire Western Hemisphere that brought hundreds of Paralympic athletes from around the world to Fort Benning to showcase courage, determination, inspiration and equality in shooting sports.

Earlier in the year, the unit hosted its second consecutive World Cup in two years which stood as the largest international shooting sports event to ever take place on the continent as dozens of shooters earned coveted quota slots to the 2012 Olympic Games. By dramatically expanding its marksmanship training outreach, the unit established itself as a primary source and main proponent for marksmanship training in the Army.

In 2012, the unit looks to take it a step even farther. In Afghanistan, the unit is prepared to assist in the creation of the Afghan National Army Marksmanship Instructor Branch. A handful of Soldiers will represent the unit, the Army and their country at the Summer Olympic Games in London followed by the very first active-duty Soldier to ever compete in the Paralympic Games.

In March, the unit will host the annual U.S. Army Small Arms Championship, the premier marksmanship training event in the military, and the inaugural Army Strong Collegiate Shooting Championships. The USAMU intends to make this innovative event the largest multi-discipline, shoulder-to-shoulder collegiate and junior shooting sports championship event to ever take place in the United States as it brings four prestigious competitive shooting sports championship venues to the USAMU’s world-class facilities simultaneously.

In addition to the increasing number of Soldiers it will train in 2012 the USAMU is preparing to welcome 24 new members to the family with the creation of the Wounded Warrior marksmanship instructor group and Paralympic section upon approval by Army headquarters as part of the “Total Army Analysis.” This novel approach to giving the Army’s wounded combat veterans a chance to continue to serve will enhance the combat readiness of the Army, highlight the notion of ability rather than disability, and serve as an inspiration for those who relish the chance to continue service to their country as a Soldier.

“I am grateful to the Army for bestowing the Army Superior Unit Award on this extraordinary unit made up of remarkable people,” concluded Hodne, “I am even more grateful for the opportunity to serve with such an incredible team of Soldiers, Civilians, and Family members who enable this unit to accomplish its wide-ranging mission in a manner and with a strength like no other.” 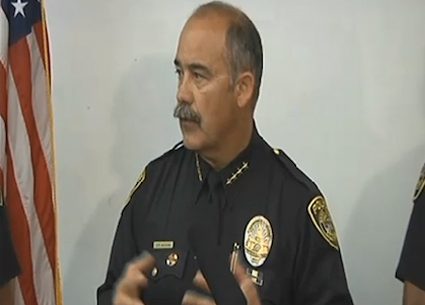 Officer under investigation for sexual misconduct with teenage minor shot and killed while on duty by fellow officers (video).