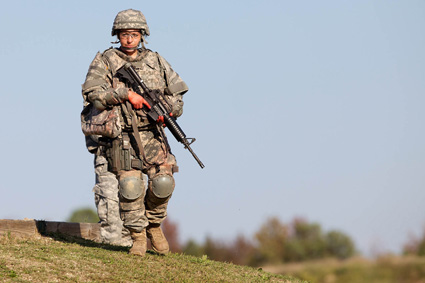 USAMU’s mission is to enhance the Army’s recruiting effort, raise the standard of the Army’s marksmanship proficiency, and support the Army’s small arms research and development initiatives in order to raise the Army’s overall combat readiness.
In 2010, USAMU trained more Soldiers, played a crucial role in leading innovative small arms research and development initiatives, and put the very best of Army Soldier skills on display to an unmatched degree as the unit’s Soldiers won more world and national championships than ever before.

While the USAMU maintained a forward deployed presence throughout the entire year and established a successful and novel
marksmanship instruction program for Afghan National Army soldiers, one of the most gratifying aspects of its commitment to the war may have been the unit’s role in the first-ever ANA female Officer Candidate School class. Sgt. 1st Class Janet Sokolowski volunteered to deploy to teach this inaugural class how to properly shoot the M9 pistol.

“It was the one of the most rewarding things I have ever been part of,” said Sokolowski. “The girls were like sponges. They realized the opportunity in front of them and listened to everything I told them. I wish I could have stayed longer.”

USAMU will continue to provide a persistent rotating presence or marksmanship training teams to Afghanistan for the foreseeable future. 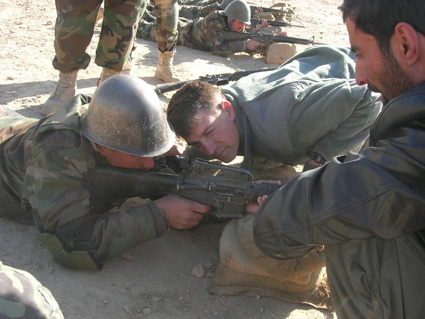 At home, the USAMU trained more than 4,000 Soldiers from Forces Command, U.S. Army Special Operations Command, and TRADOC on marksmanship fundamentals and techniques. It hosted the highest-attended All-Army Small Arms Championship of all-time, enabling more than 300 Soldiers from across the force to receive premium training while competing in stressful situations. The unit also established a new combined Close Quarters Squad Designated Marksman class, which added to
the slew of marksmanship programs offered to Soldiers and units as they improve their marksmanship techniques prior to deploying to combat.

The unit’s Custom Firearms Shop leveraged its expertise and facilities to improve weapon systems and ammunition, and provide rapid feedback to ongoing broader Army research and development projects. A highlight was maintaining the unit’s proud tradition of providing the Army with its precision long-range small arms.

“For nearly half a century, our Army and our Soldiers have benefitted from the experience and skills of the absolute best gunsmiths in the world – the gunsmiths of the USAMU Custom Firearms Shop,” said Lt. Col. Daniel Hodne, commander, USAMU. “The M21, M24, M4 Designated Marksman Rifle, and M24 upgrade (M2010), were all developed and tested
by the shop.” 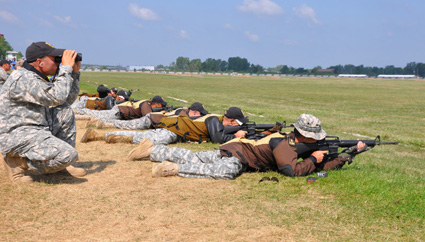 The USAMU was paramount in the success of the Army adopting a new capability for our snipers with an upgrade to the M24. The ability to provide not only technical data but direct user feedback assisted with the development of requirements and product improvements which will allow Army snipers to successfully complete missions abroad.

Of course, it wouldn’t be a successful year without dominating in competition. In showcasing the Army, the unit set 32 national records, and won 28 first-place individual medals in world, national and interservice matches. Staff Sgt. Josh Richmond won the Gold Medal in Men’s Double Trap at the 50th International Shooting Sport Federation World Championships in Munch and was named USA Shooting’s Male Athlete of the Year for 2010.

USAMU also hosted dozens of countries and international competitors during the 2010 ISSF World Cup USA. This event experienced so much success that the ISSF awarded a second consecutive World Cup to the United States for 2011, a rare occurrence. World Cup USA 2011 will come back to the USAMU and Fort Benning in May 2011. 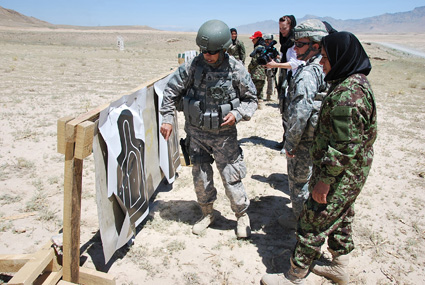 USAMU also formed a new Paralympic Section to create a unique opportunity for Wounded Veterans who are able to continue to serve on active duty and meet paralympic criteria to show the strength of our Soldiers in Paralympic competition. Capping off a highly successful National Matches was the championship won by Sgt. Sherri Jo Gallagher. The service rifle shooter won the National High-Power Rifle Championship, the first servicemember to do so in 23 years. It was the start of many firsts for Gallagher.

Gallagher represented the USAMU, U.S. Army Accessions Commandand TRADOC in the Army Best Warrior Competition, a grueling, week-longevent that tested the competitors on warrior task and drills, combat scenarios, marksmanship, leadership, and a myriad of other categories.

Sgt. Maj. of the Army Kenneth O. Preston announced on Oct. 25 that Gallagher was the 2010 Army Soldier of the Year, the first woman to win the honor, a crowning achievement for this unit of 100-plus Soldiers.

“This unit is unique, for its mission, its history, and its accomplishments,” Hodne said. “Most of all, it is unique for its
remarkable people. I am extremely proud of them and grateful for their hard work and dedication to this unit, our Army, and our Nation.”