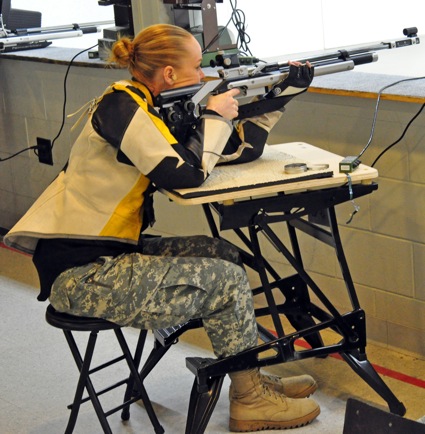 Despite sustaining serious injuries in Iraq, which included the loss of part of his right leg, Sgt. Robert Price wanted to stay in the Army. He refused to believe that his disability would prevent him from continuing to serve and he looked for any avenue available to continue his relished role as a noncommissioned officer.

Sgt. Kisha Makerney had similar goals. Even though she lost a leg in a motorcycle accident, she persevered through the rehabilitation and was resolute to staying in the Army to serve as an inspiration for other Soldiers. In fact, she volunteered for and served a second tour in Iraq,, being told that she was the first female amputee ever sent to battle.

As if by fate for these two noncommissioned officers, the U.S. Army Marksmanship Unit with the assistance of the World Class Athlete Program was in the process of building a ground-breaking Paralympic section, thus creating a unique opportunity for wounded veterans deemed able to continue to serve on active-duty to demonstrate the strength of our Soldiers in Paralympic competition. The personal triumph of each of these NCOs and their manifestation of the notion of ability over disability led to job offers with the USAMU for both. As Price and Makerney joined the prestigious unit’s ranks and stood alongside Sgt. 1st Class Josh Olson, USAMU’s pioneer paralympic shooter, the Army reached a monumental moment in history.

While continued service for disabled veterans is not new, particularly in the special operations community, granting these wounded warriors the opportunity showcase the best of Army Soldier skills and connect America’s Army to the American public is. These Soldiers will also share their mastery of marksmanship fundamentals required at world-class levels with Soldiers and units across the force through USAMU’s marksmanship training program. 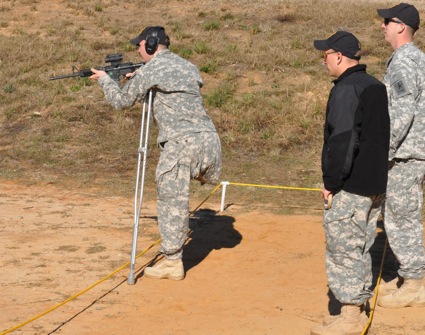 FORT BENNING, Ga. — Sgt. 1st Class Josh Olson is the pioneer Paralympic shooter for the U.S. Army Marksmanship Unit. Olson, seen firing on a target at the unit’s Krilling Range, inspired the concept for a new Paralympic team at the USAMU, enabling Wounded Warriors a chance to continue serving in the Army.

“These proud veterans exhibit ‘a strength like no other’ each and every day,” said Lt. Col. Daniel Hodne, commander, USAMU. “They will directly raise Army combat readiness through imparting their skills in marksmanship instruction. More importantly, they will serve to inspire generations of Americans as these wounded warriors will epitomize the triumph of the human spirit.”

USAMU submitted a concept plan to Headquarters, Department of the Army, which seeks permanent uthorizations to hire select wounded veterans to serve as paralympic shooters and marksmanship instructors. As an interim solution, WCAP agreed to assign those selected and attach them for duty
at USAMU.

REFLECTING
Price has always led from the front. Born in Jacksonville, Florida, he was operating a forty-foot boon arm on a Buffalo vehicle as part of a route clearance team in northern Baghdad on Jan. 14, 2007 when a cigarette stand they were approaching detonated, sending copper slugs through the crew compartment of his vehicle.

Price was rushed to Balad and then Landstuhl before being flown back to the U.S. He settled at Brook Army Medical Center in San Antonio, where he was set to begin a grueling, seven-and-a-half-month long rehabilitation for a right leg below-knee amputation.

“I met a lot of good people that helped me overcome my injuries,” he said. “I also found out that my rehab made me a better person by wanting to help others out. Once I completed all of my rehab I was found fit for duty and was a squad leader for other wounded Soldiers. This gave me a chance to help repay the people that helped me through my injuries and also help others that are in a similar situation.” 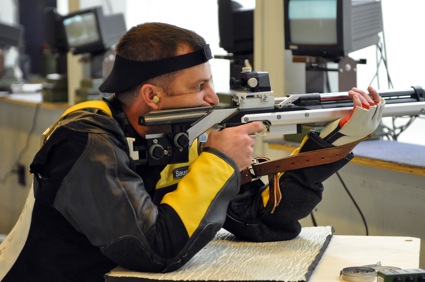 FORT BENNING, Ga. — Sgt. Robert Price joined the U.S. Army Marksmanship Unit late in 2010 as a new Paralympic shooter. Severely wounded while deployed to Iraq in 2007, Price is committed to meeting the high standards set at the USAMU while showcasing the Army to America’s public.

Price became aware of the USAMU after attending a training camp the unit hosted for Soldiers competing in air rifle at the inaugural Warrior Games last May in Colorado Springs. He competed in air rifle, archery and seated volleyball. He also had the honor of carrying the torch for the Army during the opening ceremonies of the games. It left lasting memories and motivation to keep serving in the Army.

The Warrior Games also left lasting memories for Makerney. The Fort Towson, Okla., native lost her left leg in a motorcycle accident just four months after returning home from a deployment to Iraq in 2005.

The front tire blew out and she lost control of the bike, severing her left leg below the knee among other major injuries. The accident shattered bones but it didn’t shatter her drive and determination to keep living and serving.

“My Warrior Game experience was truly amazing,” she said. “The camaraderie was unbelievable. Everyone overcoming their injuries to compete, to represent their military force-everyone’s spirit was so fierce; you would almost forget anyone had ever been injured.

“I am happy to say that losing my leg has, so far, been the best thing that has ever happened to me. And what I mean by that is that it’s made me a much stronger person, I learned true faith, and it has helped to develop me into the woman I want to be and to be able to help others.” 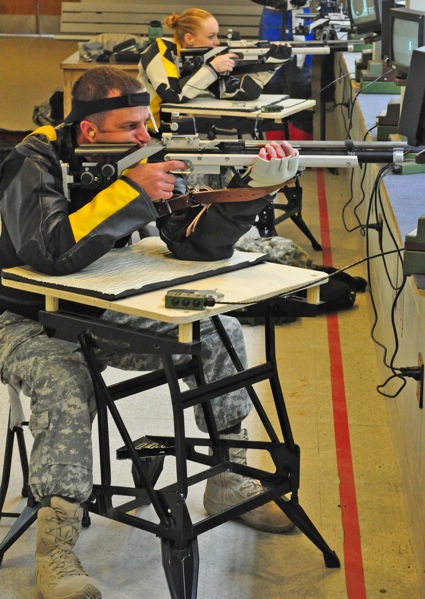 COMPETE AND INSPIRE
The bar is set high for all Soldiers of the USAMU and winning is expected. The new Soldiers are relishing the chance to compete and embracing the challenge of upholding the USAMU standards.

“I expect the USAMU’s Paralympic team to be the pinnacle of Paralympic-style shooting throughout America and eventually the world, just as the rest of the USAMU’s team’s are” said Sgt. 1st Class Bill Keever, handpicked by the commander and sergeant major of the unit to be the NCOIC of the new section.

Earlier this month, Makerney and Price competed in their first competitive match, joining Olson in Colorado Springs at the Rocky Mountain Rifle Championships. Most athletes must not only deal with their fellow competitors but their own raw nerves, something that even the top athletes in all sports have to cope with.

But after going through the physical and mental rehabilitation they had to endure, competing in a shooting match was one of the most painless activities that Makerney and Price have had in years and their strength was on full display–Makerney won a gold medal in the 10m Air Rifle Prone-Mixed event Feb. 13 and Price, in his first competitive match ever, came in fifth.

“I have always said, one of my favorite places to be is behind a rifle,” Makerney said. “The USAMU is full of champions so my expectations are to soak in all of the wisdom, knowledge and training so that I can go on to compete and be successful.

“But I also want to be able to help other injured Soldiers or civilians, to give them hope that no matter what comes your way, whatever bad things might happen to you, with determination and faith, you can rise above it.”

Aside whatever accomplishments the team earns this year, the Soldiers have already succeeded by becoming an inspiration for others. The landmark team is sure to be a motivation for others who have dreams to continue serving and showcasing the strength of the Army.

“If I was talking to a wounded Soldier right now in the hospital and he or she was worried about their military career being over I would have to tell them to never accept defeat,” Price concluded. “With a positive mind and a positive attitude you can overcome any obstacles that life throws at you.” 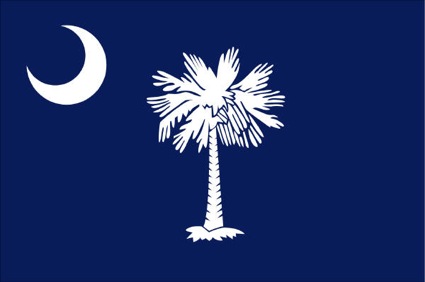