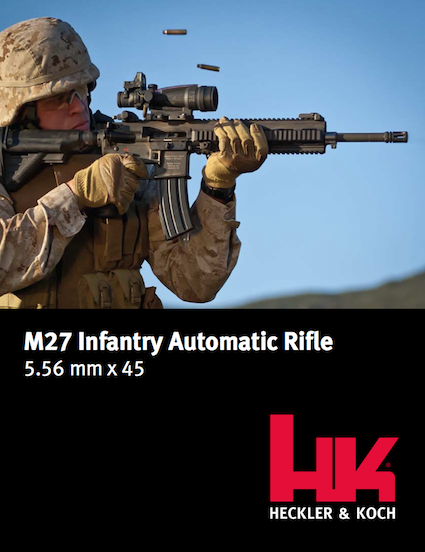 Heckler & Koch was awarded a competitive contract to produce the U.S. Marine Corps’ new Infantry Automatic Rifle (IAR). The formal “Full Rate Production” announcement by the Marines caps a competition that began more than three years ago. Designated the M27 Infantry Automatic Rifle, the lightweight, 11.62 pounds weapon with ancillary equipment, is a variant of the highly successful Heckler & Koch HK416 used by military, law enforcement, and special operations units in the U.S. and throughout the world. The M27 IAR replaces the heavier, M249 SAW (Squad Automatic Weapon) which has been used by the Marines in Infantry Squads since the mid-1980s in the automatic rifle role. Both weapons fire the 5.56 mm NATO cartridge. The five-year, indefinite delivery, indefinite quantity contract calls for possible delivery orders up to $23,600,000 for the production, delivery, and associated support of the Marines’ Infantry Automatic Rifle program. The Marine Corps approved the full rate production and fielding of the M27 Infantry Automatic Rifle during the summer of 2011. There will be one M27 IAR per four-man fire team, with three M27 IARs per squad, 28 per company and more than 4,000 across the entire Marine Corps.

“After a rigorous testing process, both in garrison and deployed environments, and in-depth consultation with weapons experts through the Corps, the commandant approved the fielding of the M27 Infantry Automatic Rifle,” said Marine spokesman Major Joseph Plenzler in a press statement in June. “The fielding of the IAR will significantly enhance the ability of our infantrymen to gain and maintain fire superiority, reduce their fighting load and provide them a more ergonomic and accurate weapons system that can keep up during the assault.”

“Winning the Marine’s IAR competition is another milestone for our HK416,” said Wayne Weber, President of Heckler & Koch USA. “Developed at no cost to the U.S. taxpayer and with U.S. military input in the aftermath of the September 11th attacks on America, the HK416 competed against—and beat many worthy challengers. This contract award is a direct testament to the superior performance of the HK416 and it is an honor for Heckler & Koch to equip the Marines with such a fine rifle.” Source: HK 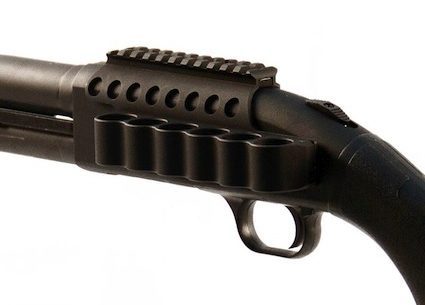 Heckler & Koch was awarded a competitive contract to produce the U.S. Marine Corps’…