0
SHARES
65
VIEWS
Share on FacebookShare on Twitter
HK M27 IAR now adaopted as the replacement for the SAW; Explorer cases by Ameripack.

The Marines’ new Infantry Automatic Rifle (IAR) made by Heckler & Koch is being deployed to replace the M249 Squad Automatic Weapon (SAW) on Leatherneck fire teams.

The IAR was selected in preference over the entries from companies including Colt Defense and FN. The IAR is designed to be a full-auto, 5.56mm NATO light automatic weapon able to use the same M16/M4 30-round magazine as any Marine rifleman. 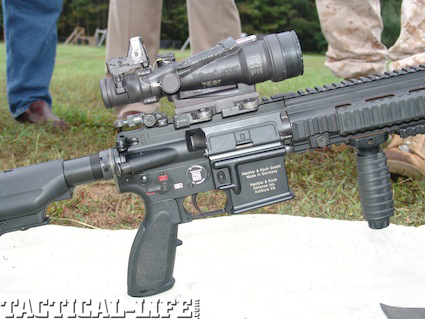 The M27 with Trijicon SAW optic and Manta Rails.

In May 2010, the USMC announced the adoption of the HK IAR as the M27 Infantry Automatic Rifle and placed them with units in combat areas.

The M27 has proven that it provides better firepower than the SAW without the steel links in belt-fed ammo that add bulk and weight for the gunner, make reloading a two-handed evolution and take the gun out of the fight to clear some stoppages. Is this just my opinion? No. These are facts passed to me at Quantico by Chris Wade, a Marine Corps Battalion Gunner, while I was knocking down targets with three-round bursts with the M27 at 500 meters—something that would have taken half a belt with a SAW. If the HK IAR makes a salty Marine Gunner happy, I am not going to argue the point. 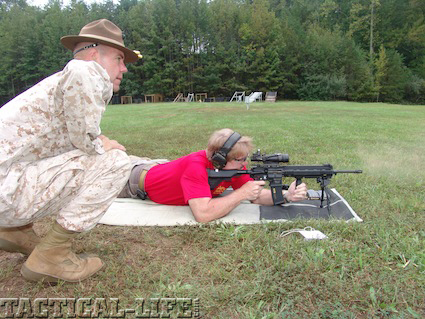 The short-stroke gas piston HK IAR is similar in operation to the HK416 and weighs 7.9 pounds empty, with a 16.5-inch, free-floating barrel and a collapsible stock that extend the overall length of the weapon from 33 to 36.9 inches. The IAR has many of the standard features, controls and characteristics of the Eugene Stoner-designed AR-15/M16/M4, so operators can easily transition from their standard rifle or carbine to the IAR with minimal re-training. The closed-bolt IAR uses the Stoner seven-lug rotating bolt, ambidextrous safety/fire selector, last round bolt-hold-open device, rear charging handle and magazine release button on the right side of the magazine well. 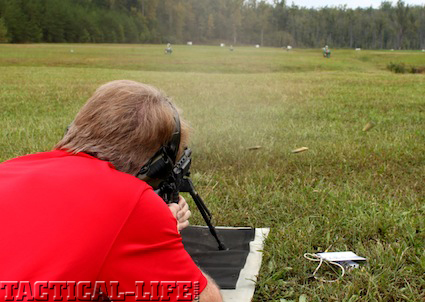 The IAR is fitted with four Mil-Std-1913 Picatinny rails for the standard Trijicon SAW optic, but it is capable of mounting any night or day, iron or optical sighting system. The Trijicon SAW optic has 3.5X magnification and slightly longer eye relief than Trijicon’s Rifle Combat Optic to help prevent getting a “scope eye” from the weapon’s larger recoil when used on full-auto. 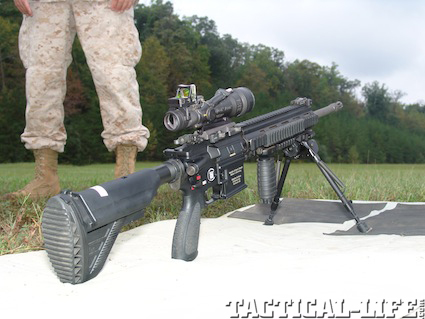 The M27 on the range at Quantico MCB.

I found the M27 controllable with its comfortable and fully adjustable stock. The rugged Trijicon TA11 SAW optic made it really hard to miss on full-auto or with single shots that dropped targets at 300 to 500 meters like a precision rifle. The M27 has a higher rate of fire than the M4, so putting a high volume of fire downrange is easily accomplished. Overall, the M27 is an effective battle weapon, and since the squad machine gunner is always a primary target for bad guy snipers, having a light automatic weapon that looks just like an M4 might make that job a bit safer too!