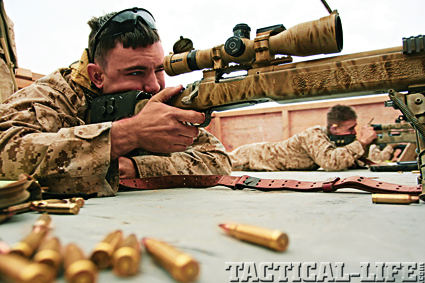 McMillan/Remington M40A3. The USMC’s M40A3 is assembled by the Precision Weapons Section in Quantico VA, with parts provided by several manufacturers. This makes it a unique weapons system.

The Marines’ Scout Snipers have long been one of their most valuable assets. They are highly motivated and highly skilled at their work, which traditionally employed advanced fieldcraft to infiltrate through bush and jungle, relay intelligence, and service selected high-priority targets.

In Iraq, there is scant bush and no jungle: It is the urban jungle where the enemy often lurks. In Afghanistan, as this is written the 6th Marine Regiment is leading 6,000 Allied and Afghani troops in attacks on the Taliban stronghold of Marjah, in Helmand province. This is not merely a mountain redoubt, but includes compounds and villages that are primitive, but urban in nature.

The Corps has once again been pro-active in taking the fight to the enemy, by training its deadly and adaptable Scout Snipers to do what they do best, now specifically in urban terrain. The fieldcraft of Scout Snipers has been honed to include the valuable skill set for MOUT (Military Operations in Urban Terrain). Here the precision with which Marine Scout Snipers can service selected targets is of particular value because of the increased concern over collateral damage in such environs.

Changing Face of War
The classic role of a Marine Scout-Sniper was that of a highly skilled marksman whose fieldcraft, stalking, and observational skills were of equal if not greater value than his skill at arms. Silent; deadly; one-shot, one-kill and never be seen, were his watchwords.

The wars of the 21st Century, however, have often been in a different setting from the last major punch-up. The flat, featureless deserts of Iraq and the arid, bare mountains of Afghanistan offer scant concealment. And today’s urban jungles offer essentially no concealment—especially important when a typical Marine with a scoped rifle bears no resemblance at all to a typical local.

Before the onset of the “shock and awe” festivities that began Operation Iraqi Freedom, the Coalition had many SpecOps boots on the ground, particularly in the Baghdad area. These advanced troops, however, were not there to engage the enemy. They operated under deep cover, and for obvious reasons never displayed weapons. Theirs was a different mission, dealing with pre-invasion chores such as making payoffs to pacify Iraqi military staff amenable to such influences, coordinating with anti-Saddam entities, making sure our precision-guided munitions had proper guidance, doing Infrastructure Sabotage Lite, setting up comms for D-day and doing general recon work. But these operators had the luxury of making every effort to look like the locals. A Marine sniper team with an M40A3, ARs, a spotting scope, miscellaneous battle rattle and other impedimenta does not.

McMillan/Remington M40A3. The USMC’s M40A3 is assembled by the Precision Weapons Section in Quantico…