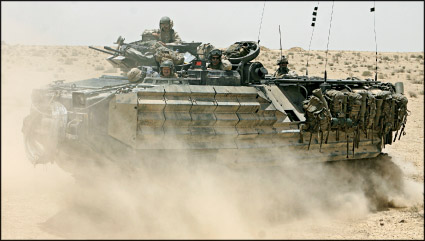 Chaos abates further down river and the straining engine’s roar now dominates what’s left of your hearing. “Listen up, check your ammo and weapons. Who needs rounds? How many wounded are there? Get ready, we’re going ashore and go firm until we get relief,” were the rapid-fire commands of your platoon sergeant. You look around and see a gaggle of grunts lying below in various states of pain and distress. Ammo is redistributed and you suck long and hard on your canteen. The Track commander turns to the platoon sergeant, and pointing and yelling over the diesel engine’s noise says, “Over there, that house with the wall, let’s go there, okay?” The E6 nods approval and the AAV heads for a relatively large two-story house with a high stone and adobe wall. Repeated attempts to communicate with command have failed, the net is so crowded and everyone is “stepping” on each other. As the AAV nears the urban area’s shoreline it grabs ground and the tracks take over. Up and over the bank and it’s back on terra firma again. The rear ramp drops and Marines fan out and set up a 360-degree defense while troop leaders study the house and surrounding area with binoculars.

“Mount up, we’re going for that house over there.” The platoon sergeants order came none too soon, because being deployed in the open like this gave you a very uneasy feeling. “Sarge, think you can bust the gate,” were his words to the AAV commander that took both the form of a question and command. Slowly the AAV advanced on the walled compound that you now see consists of the main residence and several smaller out-buildings. Definitely a wealthy family’s property and it appears well suited for setting up a defensive position. The platoon sergeant further displays his combat savvy by raising his right arm and yelling to the driver, “Stop! Creedmoor, take your fire team and check for booby traps on the gate.” A lance corporal and three of his men dismount through the rear hatch, split into battle buddy teams and approach the gate from both sides. Two face out and drop to kneeling positions to provide cover while the team leader and the other examine the gate. Troops in the Track cover their six and the AAV gunner covers the compound. “Don’t take all day,” the sergeant spits out in a slightly irritated tone and the team leader replies, “It’s chained shut, but it looks clean to me.” “Okay, all hands dismount. We’re punching through the gate and I want security to fan out when we get through. Squad leader, we will cover the house and other buildings from the Track and I want you to clear the main building first and out-buildings second, got it,” another Fragmentary Order is issued by the veteran NCO. Minebait revs the power plant, the AAV lurches forward and with a loud “clang” makes short work of the gate and takes down part of the wall in the process. 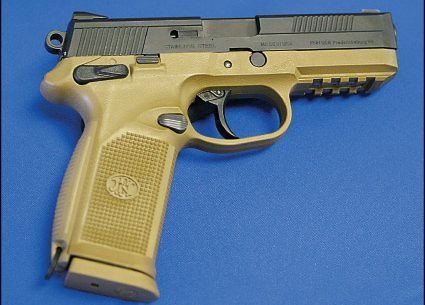