WASHINGTON, Oct. 13, 2009 – A new Department of Veterans Affairs ruling will soon relieve Vietnam veterans suffering from three specific illnesses from the burden of proving their ailments are linked to Agent Orange exposure to receive VA health care and disability payments.

Shinseki made the decision based on a recent report by the National Academy of Science’s Institute of Medicine. The report cited new scientific studies pointing to a strong connection between the illnesses and Agent Orange exposure.

Shinseki determined that evidence was compelling enough to establish a presumption that affected veterans’ illnesses are service-related, Gingrich said.

This determination will short-cut the process for them to receive services through what Shinseki called “a world-class health care system,” as well as monthly disability payments.

But before the ruling takes effect, it must be published in the Federal Register and opened for final comment, Gingrich explained. He predicted that the process would be completed early next year.

It’s unclear exactly how many of the 2.1 million Vietnam veterans the ruling will affect, Gingrich said. If 10 percent have the presumed illnesses, that could result in some 200,000 new VA claims.

Agent Orange, named for the orange-colored barrels in which it was stored, was sprayed widely during the Vietnam War to defoliate trees and remove concealment for the enemy. Veterans have long blamed the herbicide for causing a variety of illnesses, but until now, there’s been no official recognition of a link. That put the burden on veterans to prove an association – a process Shinseki conceded too often has created an adversarial relationship between the VA and veterans.

Shinseki, a retired Army general and a Vietnam veteran himself, lamented this situation this summer at
a medical symposium in San Antonio.

“I have asked why, 40 years after Agent Orange was last used in Vietnam, this secretary is still adjudicating claims for presumption of service-connected disabilities tied to its toxic effects,” he told attendees at the Association of the U.S. Army’s Institute of Land Warfare Army Medical Symposium.

Shinseki also questioned why the debilitating effects of Gulf War illnesses still are being debated 20 years after Operation Desert Storm.

“Why weren’t conclusive studies conducted by [the Department of Defense] and VA to render presumption of service-connected disability resulting from exposure to toxic environments associated with these operations?” Shinseki asked. “Such findings would have facilitated VA’s settling of service-connected disability claims in far less time. The scientific method, and the failure to advocate for the veteran, got in the way of our processes.”

“We must do better reviews of illnesses that may be connected to service, and we will,” he said. “Veterans who endure health problems deserve timely decisions based on solid evidence.”

Shinseki’s decision brings to 15 the number of presumed illnesses VA recognizes. Others are:

— Soft-tissue sarcoma other than osteosarcoma, chondrosarcoma, Kaposi’s sarcoma or mesothelioma. 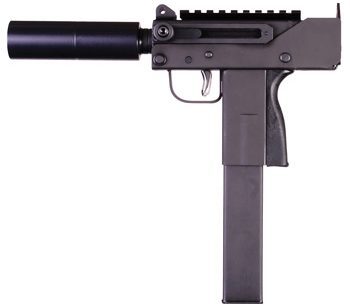 Now with a side-cocking mechanism, the Masterpiece Arms’ MAC-10 handgun has greater versatility.