by David Geer
in Uncategorized
0

If you think weaponized unmanned aerial vehicles (UAVs) are still too new to combat zones for law enforcement to consider them for domestic use, think again. Vanguard Defense Industries has developed the weapons-ready ShadowHawk, and it’s already been deployed by local law enforcement that have chosen to go high-tech in order to target bad guys. 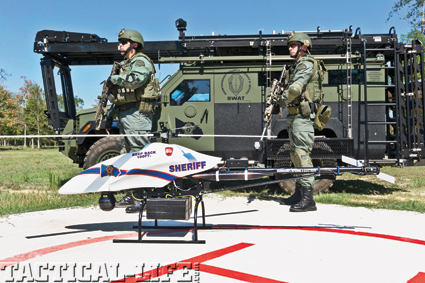 The Kevlar fuel tank mounted beneath the ShadowHawk allows it to stay in the air long enough to provide complete surveillance of an area and engage suspects with buckshot, teargas, grenades and less-lethal capabilities.

The Montgomery County Sheriff’s Office (MCSO) in Conroe, Texas, recently purchased the ShadowHawk Unmanned Aerial System (UAS), a small, unmanned helicopter configured with an avionics upgrade that includes stabilized flight appropriate for available weapons platforms. “We have been discussing the shotgun and launcher platforms. What we envision is a 12 gauge delivery system with lethal and less-lethal deliveries. That is the most robust platform,” says Chief Deputy Randy McDaniel of the MCSO.

Vanguard can equip ShadowHawks just like the one McDaniel’s department bought with either 40mm grenade launchers or 12 gauge shotguns, according to Michael Buscher, CEO of Vanguard. Although the craft is primarily an ISR platform for intelligence, surveillance and reconnaissance, these weapons platforms are available for the ShadowHawk today for domestic law enforcement use.