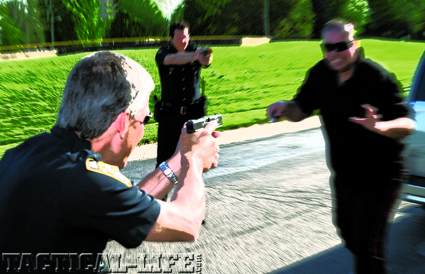 Officers killed in the line of duty is a common news headline these days. The V.E.S.T. (Violent Encounter Survival Training) program offered by Sgt. Jim Detrick and Deputy Don Gulla of the King County Critical Incident Debriefing Team aim to put an end to the ever growing list of men and women killed while trying to protect and serve.

Jim Detrick is blunt and to-the-point about some LE agencies and their tight fiscal attitude towards training. “They don’t train their officers to the standards that they hold them accountable for.” Matter of fact, he said, “they train for liability issues. They don’t train them to survive.”

It isn’t just his nearly 40 years of law enforcement experience that the former police sergeant has under his duty belt, or his veteran status as a Critical Incident Response team leader either, or even the fact that the 62-year old Detrick is a well respected International Law Enforcement trainer and consultant, that set the foundation for his conclusion.

No, the initial building blocks for Detrick came in 1980 when he experienced his own sudden and very violent encounter. Then, while off duty and unarmed he was confronted in a restaurant by a convicted felon who had recognized him from a previous run in.

“Remember me,” said the man bringing up a pistol and pulling the trigger. With little time to react and as he had been taught in handgun take-aways, Detrick grabbed the pistol and pivoted hard to his right trying to turn away from the muzzle blast. The first shot though hit him in the left side of his torso and in the struggle that followed he was shot four more times across the thighs and groin before he finally wrestled away the gun and subdued the attacker.

Birth Of V.E.S.T.
A long and painful recovery and a long, hard look at the established Defensive Tactics training programs, S.O.P.s, and Use-of-Force policies then in place troubled Detrick. Further examination of similar programs, procedures and policies in other agencies and departments convinced him of the need for better and more comprehensive training.

The two teamed up to create V.E.S.T., Violent Encounter Survival Training. Their goal was to provide police and correction officers with a more viable and effective way of dealing with deadly confrontations on the job, and the emotional baggage that goes along with it. Detrick and Gulla devised a two-day course that addresses these critical issues, with the training time equally divided between the classroom and the work-out mat. 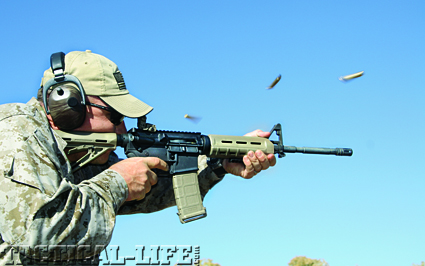 Officers killed in the line of duty is a common news headline these days.…