Roadside bomb and IED (improvised explosive device) attacks against convoys account for approximately 60 percent of US Army and Marine Corps combat deaths and injuries in Iraq, and recently 75 percent of battle casualties in Afghanistan. Curtailing these appalling statistics has been top priority for military commanders. Troops in convoys need training to respond to ambushes and other unexpected events.

In 2004, Army and Marine Corps leaders called on US defense companies to find a quick and effective answer to this urgent requirement. The response was one of the most remarkable recent military procurement success stories that led to significant improvements in the Army and Marine Corps’ responses to ambush attacks. It reduced casualties and kept convoys on the road in Iraq and Afghanistan. 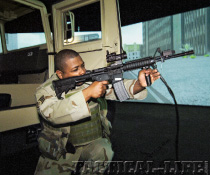 Convoy Training
Andre Elias, program director for Virtual Training Solutions at Lockheed Martin’s Simulation, Training & Support business unit in Orlando, Florida, has been involved in the convoy training initiative from its inception. “A measure of the urgency for a solution to convoy ambush training was the US Army’s solicitation to industry,” Elias explained. “The Army approach was anything, but routine.”

More than a dozen defense companies, including Lockheed Martin ST&S, responded immediately to the Army’s new requirement. The proposed methods ranged from computer-based systems to large-scale simulators that replicated trucks and HMMWVs. Lockheed Martin developed a working prototype within two weeks of the request and demonstrated it to the Army. Because a HMMWV was not available for the prototype, Lockheed’s assembly crew built a plywood model precisely to full specifications in just 48 hours.

Army training program specialists evaluated every competitor, completing visits within two or three weeks. Over the next 45 days, Army officials secured approvals and funding for the training effort, and about 90 days from its inception, the Army awarded Lockheed Martin a contract to build and deliver eight new convoy-training systems in two months. The VCCT (Virtual Convoy Combat Trainer) was born after a record-setting gestation period.

Building any new system from the ground up in 60 days is a tall order, but it’s even tougher in the middle of a hurricane. Just as work on the VCCT began, Hurricane Charley churned north from western Cuba into the Gulf of Mexico and plowed through central Florida, right over Orlando on August 13. The storm caused significant damage, but the Lockheed Martin group never skipped a beat.

VCCT Details
The Army had awarded another contract to a company that focused on a virtual heads up display for training, but quickly decided Lockheed’s approach was more natural. The VCCT used no artificial devices. The trainer incorporated screens arrayed around the hummer with projected displays that replicated cityscapes in Baghdad, Fallujah and Tikrit. The system also included a Small Arms Trainer using weapons such as the .50 caliber machine gun and M16s. The simulator also replicated vehicle and combat noises. Eventually, the Lockheed Martin team enriched the virtual displays with people shooting RPGs (rocket propelled grenades) and other weapons. Four VCCT’s are linked together to simulate an actual convoy so trainees can communicate and work together, improving team responses and dynamics.

“All of this activity took place between March and August 2004,” said Elias. “We received our first contract award in June. The Army wanted the VCCT built in a mobile configuration, which we did. We delivered our first systems to two different bases, and they went into service immediately. The whole idea was to train the maximum number of soldiers on pre-deployment cycles, and we made a large contribution to that goal right away. Needless to say, 2004 was a very exciting and busy year.”

Since the VCCT’s inception, Lockheed Martin has continuously improved the trainer. It introduced the RVS (reconfigurable vehicle system) with subsequent production contract awards to meet the Army’s need for flexibility. The RVS can be converted quickly from HMMWV to the HEMTT (Heavy Expanded Mobility Tactical Truck) configuration to provide specific training. Reliability of the visual displays also has improved, and system software is also more robust, thanks to second-generation simulator technology.

“The system relies extensively on COTS (commercial off-the-shelf) components,” Elias said. “The system runs with personal computers, and we use commercial projectors for image generation.” Elias added that the system has plenty of potential for connectivity. It can connect to helicopter simulators and other flight simulators to replicate convoy air escort missions. It also can link training systems across the country if necessary. A similar Combined Arms Tactical Trainer program links tank trainers to bases in both the United Kingdom and Germany.

CCS Details
In 2007, the Marine Corps established requirements for a Combat Convoy Simulator. Lockheed Martin won the Marine program competition, and deliveries of 54 different simulator systems at nine locations began in 2008. The Marines train in groups of six simulators instead of four to handle more Marines at one time.
The CCS features a number of improvements derived from the Army’s VCCT and RVT experience. For example, weapons are now tetherless. Wireless technology has eliminated umbilical cables that provided recoil to the weapons and counted expended rounds. Compressed air devices in the weapon’s magazines have replaced hoses that produced air pressure to replicate weapon recoil – a far more natural approach for troops who must grab firearms in training scenarios and swing them into action without the impediments of hoses.

CCS also utilizes real HMMWV and MTVR cabs, purchased from the vehicle manufacturer assembly line. The simulators have real cabs, seats, dashboards and other components. When installed in a training facility, the full VCCT or CCS occupies a room that is about 22-feet in diameter with eight screens placed around the vehicle platform. The simulators do not use motion bases because the displays provide plenty of cues for drivers in training exercises. “The system’s focus is not on teaching the driver how to drive, but on team tactics. We emphasize teaching troops how to fight,” Elias explained. “Cameras in the system enable us to videotape reactions of troops in simulator cabs. Instructors can replay entire missions and show what people do right and wrong. Our system enables us to do things in the trainer that you don’t want to do in real life. The only way to be more realistic is to train on a live fire range, and that’s expensive and too dangerous.”

Training Regime
The training regime utilized by the Army and Marine systems is straightforward. Soldiers and Marines go through the training before they deploy. The CCS has six training bays, so it can handle up to 30 Marines at one time, since each vehicle holds five Marines. Training scenarios are built into each system, and each scenario takes 20 to 30 minutes. After sessions, trainees sit through an after-action review and get critiqued for about half an hour. The cycle then repeats for another group, enabling several hundred troops to complete initial training each day.

Although both the Army and Marine Corps are understandably reluctant to discuss specifics, there is plenty of evidence to demonstrate that convoy ambush training is paying off. Captain Geraldine Carey, spokesperson for Marine Systems Command, said, “CCS has exceeded expectations and has been well received by the operating forces.” CCS is adaptable and can train on a variety of terrains to include terrains where Marines will be conducting future operations.

Given the high profile of IED and convoy attacks, the press has monitored VCCT and CCS training from the start. Troops who benefited from the training have consistently praised its utility and fidelity to real situations they encounter in action. “Trainees have told us repeatedly that they get so immersed in the system they forget that they are in a simulator,” said Elias. “We believe our training brings troops and Marines to the same level of experience they would have after several real combat convoy missions. If we can improve situational awareness, we help take our trainees to the threshold of survival that leads to subsequent success.”

Final Notes
Elias expects VCCT and CCS will become even more sophisticated in years to come. “Technology is driving more realistic training,” he said. “Realistic training is better training, and the task we are addressing is critical.”

“It’s also very important to remember that many of the team members who developed VCCT had a direct vested interest in making the system work,” Elias concluded. “Many of our employees have kids, brothers and sisters serving in Iraq and Afghanistan. Also, Lockheed Martin Simulation Training & Support trains our customers, and they deploy to combat theaters. This means we are closer to end users than many other company divisions.” Find out more about these systems by visiting Lockheed Martin’s website lockheedmartin.com or call them at 800-345-2609.