by Mike Detty
in Uncategorized
0

0
SHARES
109
VIEWS
Share on FacebookShare on Twitter
The Vltor TS3 is a top-tier tactical AR carbine in 5.56mm with numerous enhancements over a standard AR. Shown equipped with a Trijicon Accupoint 1.25-4X scope mounted in an American Defense Manufacturing AD Recon mount.

It was the History Channel’s hit show Top Shot that alerted me to the fact that Vltor had a brand new rifle available. Tuning in one evening last September, the show started with contestants using the new Vltor TS3 rifle (which stands for Tactical Sporter 3) to engage targets at 75 and 100 yards. From what I could see, the rifle had a 16-inch barrel, railed handguard, low-profile sights and a modular buttstock. What sparked my interest was not so much the rifle itself, but the fact that Vltor is now producing a complete rifle—one that would make a great law enforcement tactical carbine. 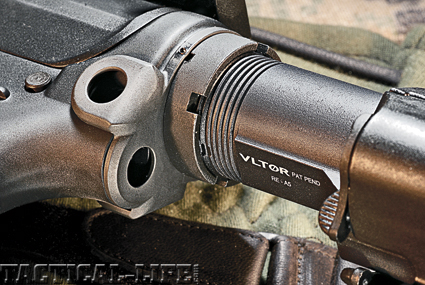 The receiver end cap features three quick-detach sling mounting points to allow the user to easily customize the carbine to his needs.

Vltor, located in my hometown of Tucson, Arizona, is perhaps best known for their modular stocks, handguards and rail systems, and has been producing rifle parts for a number of years but just recently decided to build complete rifles. The sleek and stylish lines of the TS3 inspired me to fire off an email to Vltor founder, Eric Kincel, before the segment had even finished. It wasn’t long before Kincel had a test and evaluation sample ready for me, and I drove across town for a tour of the expansive factory grounds and interview. 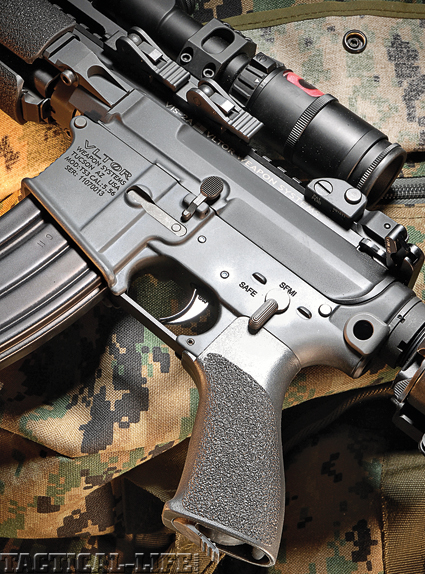 The lower receiver of the TS3 carbine, fitted out with a TangoDown pistol grip, features standard and familiar AR controls.

Kincel explained his association with the Top Shot show and how it was that Vltor was invited to be included in season three. “Taran Butler is an old friend of ours. He introduced himself to us at a firearms show seven years ago and he’s been a friend of the company since then just because he loves our products. He’s also been a guest instructor on since the first season, and is a good friend of the show’s host, Colby Donaldson. 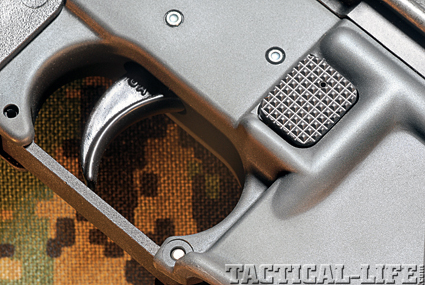 The TS3’s lower receiver features an enlarged magazine release button that makes operation of the unit easier, more instinctive and much faster.