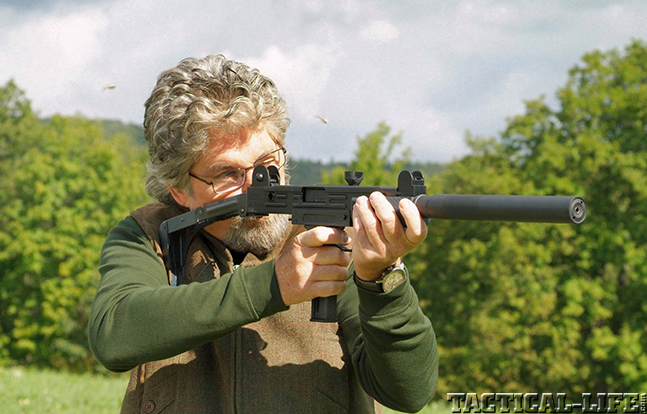 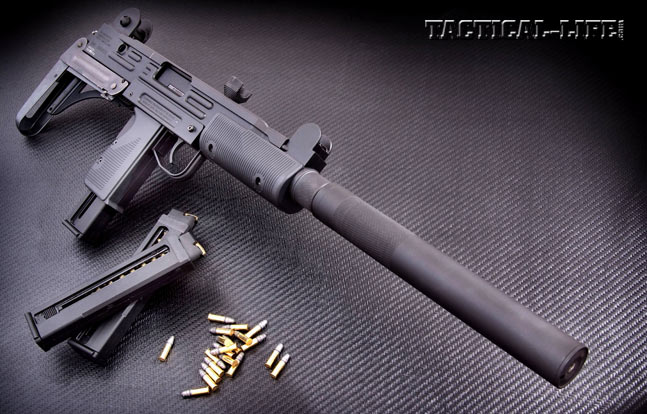 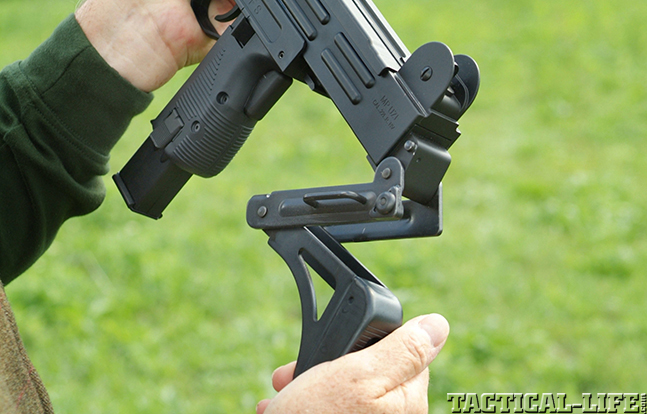 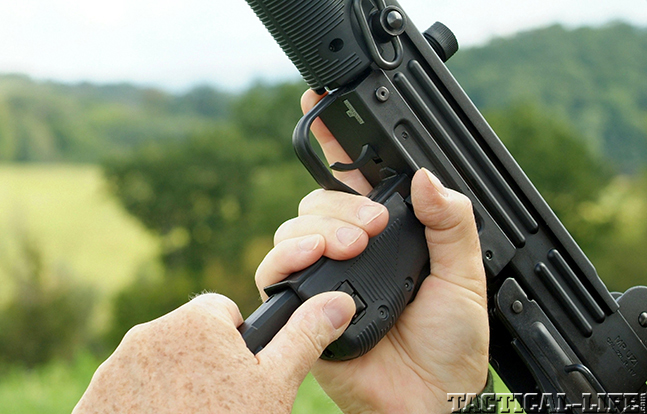 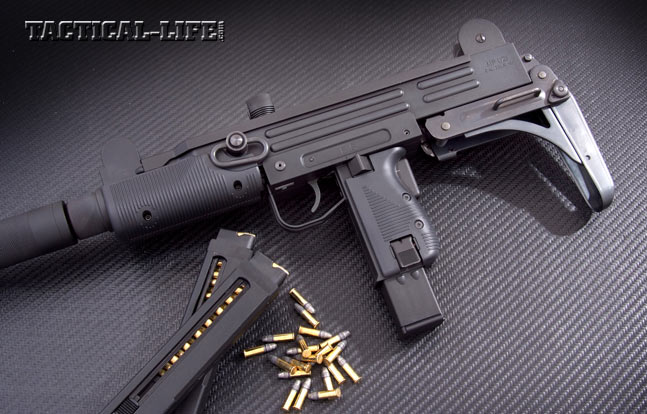 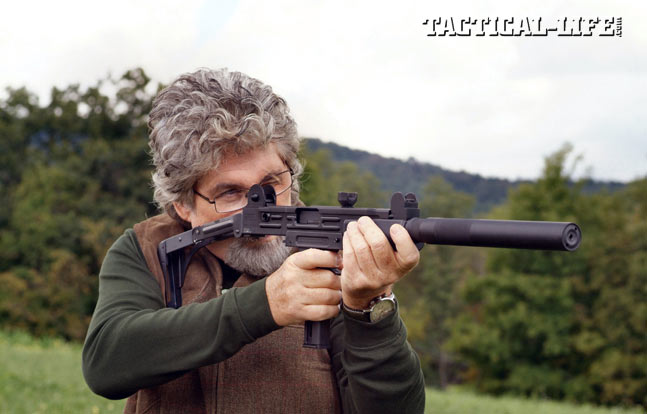 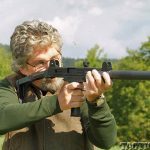 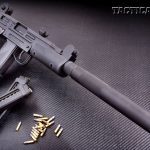 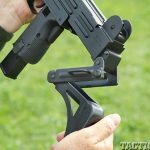 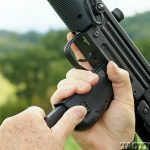 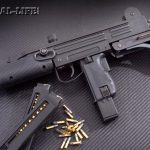 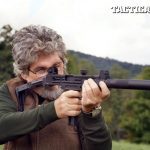 I have to admit it. I love to shoot .22 rimfire rifles and pistols. And, I am a big fan of Walther Arms, which imports and sells the Carl Walther line of .22 rimfire rifles modeled after real-world tactical weapons, such as the Heckler & Koch MP5 and the sleek, 21st century HK416. Walther builds these semi-autos to look and handle exactly like their 9mm and 5.56mm selective-fire military and law enforcement counterparts, and it is Walther’s attention to detail that truly makes these .22s so desirable for sport shooting, varmint hunting or just a fun day at the range blasting paper targets. The MP5 and HK416 (both reviewed previously in Rifle Firepower) are elegant-looking long arms, whereas the new semi-auto, 22 LR version of the Uzi carbine (and the companion Uzi pistol) are eye-catching for another reason altogether: The Uzi is one of the most famous guns in the world.

The Uzi is one of those rare firearms that has an unforgettable look, and since it has been around for over half a century, most everyone has seen an Uzi in the hands of Navy SEALs, federal agents, good guys and bad guys in dozens of movies and television dramas. But there are two truly memorable images—one fictional and one all too real—that ingrained the Uzi into the American consciousness. The first was the original Delta Force movie with Lee Marvin and Chuck Norris in 1986 (unless you’re old enough to remember The Wild Geese starring Richard Burton), and the second was the afternoon of March 30, 1981, when John Hinkley Jr. attempted to assassinate President Ronald Reagan as he left the Hilton Hotel in Washington, D.C., following a speech to AFL-CIO leaders. In the ensuing mayhem after the first shots were fired by Hinkley, Secret Service Agent Robert Wanko was captured on press cameras un-holstering an Uzi SMG from beneath his jacket as agents scrambled to protect the President. That image of Agent Wanko and the 9mm subgun has forever linked the Secret Service with the Uzi.

For those who already know how the Uzi got its name, just skip to the next paragraph, but for the rest of us, here’s a little factoid: Uzi is not an Israeli acronym for submachine gun (SMG). It is actually the name of the gun’s inventor, Uziel Gal, a captain (later, a major) with the Israel Defense Forces. Gal based his gun’s design on the Czechoslovakian Model ZK 476 and Czech Model M23/25 submachine guns, but designed his version so it could be more efficiently manufactured for quick deployment to the Israeli military in the 1950s. The final version was patented under Uzi Gal in 1952, with production rights assigned to the Israeli Ministry of Defense. In 1954, the Uzi was adopted by the Israeli military. The rest is history.

The original Uzi SMG and its variants, the Uzi carbine, Mini Uzi, Micro Uzi and semi-auto Uzi pistol, have remained a staple of military and law enforcement agencies the world over for more than half a century in calibers ranging from the original 9mm to .41 AE, .40 S&W, .45 ACP and .22 LR. Rimfire Uzi conversion kits were first offered in 1987. The Uzi remained the Israeli military’s primary SMG for almost 50 years, finally being phased out by the IDF in 2003.

They say the devil is in the details, and although the Uzi’s construction is simple, Gal put a lot of forethought into the gun’s engineering. Intended to lower manufacturing costs and make them easier to produce, the Uzi receiver is stamped out of flat steel and then formed around dies. The series of long ridges also stamped into the sides of the receiver are not for looks—though they do look good—but to actually strengthen the receiver flats against impact and damage. Unlike conventional rifles or submachine guns, the Uzi’s magazine inserts through the pistol grip just like a semi-automatic handgun, creating a better center of balance for one-handed operation. This also makes an Uzi easier to reload. Gal had often seen soldiers in the field fumbling in low light or the dark of night to insert a magazine into the receiver of a rifle, and he believed that placing it inside the pistol grip, which was already in one’s hand, would make it much easier. He was right.

Another distinctive feature is the Uzi’s benchmark folding metal stock, introduced in the 1960s and regarded by many military arms historians as the best design ever. Combined with the gun’s central pistol grip and magazine well, the Uzi rifle can be made as compact as possible for carry and ease of use when fired off-hand or from the waist, yet, by simply pulling downward on the folded shoulder rest and drawing the stock to the rear, the gun can be rapidly converted into a shoulder-fired weapon. Folding the stock away is nearly as quick and easy.

The 9mm Uzi uses a blowback mechanism with a bolt that wraps around (shrouds) the back of the barrel—a design, although not unique to the Uzi, which contributes to reducing the overall length of the weapon. The Walther Uzi .22 uses a closed-bolt, blowback-operated, semi-auto action and employs the same operating controls, manual safety and pistol grip safety as the 9mm. The latter is much like a Colt 1911 grip safety; in order for the firearm to discharge, it must be fully compressed. This specific feature was added by Uzi Gal to the original design as a preventative measure against an accidental discharge if a weapon was inadvertently dropped.

As close in measurements and operation as possible, the .22 LR, semi-auto version of the Uzi handles exactly like the 9mm. The simple and uncomplicated charging handle is mounted on top of the receiver between the front and rear sights, and one literally looks “through” the handle when sighting the gun. The handle remains forward during firing since it does not reciprocate with the blowback action. Both sights are adjustable—the front for elevation and the rear for windage, with two flip-up rear apertures. The Uzi .22’s bolt holds open after the last shot and will fire a chambered round with the magazine removed. A large, flat release lever on the bottom left side of the pistol grip makes reloading easy: Depress the release with the off-hand thumb, remove the empty mag, load in a fresh one, pull the charging handle, and you’re good to go in a matter of seconds.

“The Uzi rifle looks and feels right, and more importantly, it shoots great.”

Among special features on the Walther Uzi rifle is a faux suppressor measuring 10 inches in length that serves as a compensator for the 17.9-inch, match-grade Walther precision barrel. There is also a removable Uzi handguard that covers a standard Picatinny rail to accommodate modern tactical lights, lasers or light/laser combinations. The original Walther .22 Uzi rifle was to have had slightly smaller dimensions than the production version. The latter weighs in at a solid 7.5 pounds unloaded and measures 26.1 inches with the stock folded and 33.3 inches with the stock extended. Original specs included a shorter barrel length of 16.1 inches, like the 9mm version, as well as a folded length of 24.4 inches and a total length of 31.5 inches. The folded length, being less than 26 inches, however, would have been in conflict with NFA regulations; thus increasing the overall folded length to 26.4 inches assuaged any problem. As a case in point, the Walther MP5 .22 has an overall collapsed length of 26.5 inches to comply with NFA regulations. Do an extra 2 inches make a big difference in the appearance or feel of the Uzi rifle? Not really, nor does the slight bump in weight. The Uzi rifle looks and feels right, and more importantly, it shoots great.

I chose a trio of popular .22 LR rounds to test the Uzi: Winchester’s 40-grain Super-X High Velocity, Federal’s 40-grain Champion and Remington’s 36-grain Golden Bullet brass-plated hollow points. With a trigger pull averaging 5.88 pounds, the Uzi .22 sent the Federal Champion downrange the fastest, at an average of 1,177 fps, followed closely by Remington’s 36-grain, lead hollow points, clocking 1,170 fps. The Winchester ammo made the trip through the chronograph’s traps a little slower at an average of 1,115 fps. Accuracy, firing off-hand with open sights at a distance of 25 yards, was very consistent with all three brands of ammo. The Uzi favored the Winchester Super-X with a tight, five-round group measuring 1.2 inches in the 10 and X, with two overlapping groups. The Federal load created a best five-shot group measuring 1.50 inches in the 10 and X, matched by Remington’s hollow points, which grouped as tightly at 1.5 inches but a little above and to the left of point of aim.

“As a .22 rimfire, the Uzi is every bit the rifle its 9mm counterpart is. This is a smart-looking firearm made in the same style as the original …”

As to handling, it takes a firm grasp to depress the grip safety, and that tightens up your hold. The deep serrations on the handguard also make for a firm grip with this heavyweight .22. One might think an old, metal folding shoulder stock wouldn’t offer the same level of support as today’s high-tech collapsible designs, but the Uzi’s folding metal stock scaffolds out in an instant with a downward angle that allows an ample, though hard, cheekweld backed by a rounded steel buttplate that provides a solid purchase. It isn’t pretty, but it works as effectively today as it did when Uzi added the folding metal stock to the SMG half a century ago.

As a .22 rimfire, the Uzi is every bit the rifle its 9mm counterpart is. This is a smart-looking firearm made in the same style as the original, with a heft and all-steel construction (except, of course, for the plastic pistol grip and handguard) that makes it feel substantial. That it is heavy and old fashioned is to be expected from any military weapon that dates back to the post-WWII era. The same could be said of the AK-47, even the AR-15, and those are two excellent choices for comparison, because they, like the Uzi, have withstood the test of time. I can’t think of any better way to honor the Uzi’s long and storied combat legacy than with a semi-auto, .22 LR version. 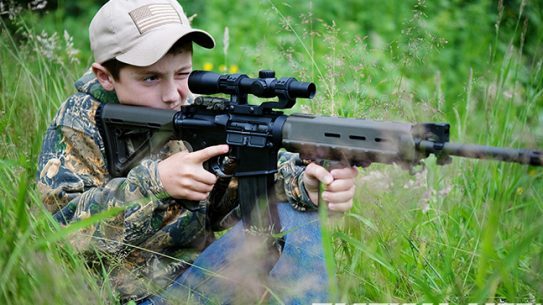 A father and son do-it-yourself mission to build a tamable 6.8 SPC beast for...