During a recent graduate-level class, the question was asked, “Is the war on drugs working?” With the fighting on the border and the recent resurgence of the “legalize marijuana” crowd, it is a subject once again at the frontline. To me, it is the same old thing. To coin a phrase by an officer who fought in that war, it is the “same circus, just different clowns.”

First of all, the “war on drugs” is a political name, given to a political action, taken by politicians. It was and is a slogan. It has not been fought like a war, and the objective has simply been to win votes. Police officers are not “warriors” in the true sense of the word, and anyone that has been to war will tell you that. The objectives are different, the rules (if there are any) are different, and the loser is dead, not in jail. Truth is, it is difficult to say what effect there would be if the war on drugs were fought the same way a real war was fought. But, isn’t it interesting that we are fighting a “war” on drugs, but Vietnam and Korea were “police actions?”

Perspective
So, is it working? Well, like most wars, it depends on your perspective. Having trained countless hours with every military or Federal unit with alphabet soup for a name, I have heard many stories of real war. It seems war from the war fighter’s perspective is completely different than the politicians that start them, the administrators that run them, and the media that covers them. This is true of every war, to include the one on drugs.

Even the perspective from the victims is completely different between those academically discussing it in school and someone who lives next to a meth house, or yes, even a marijuana grower. Having taken down hundreds of grow operations, meth labs, other labs, and drug houses of every variety it provides a different perspective. When you talk to the neighbors after a meth lab or drug operation has been removed, they will tell you the war is a success. Ask someone who wants to legalize marijuana and it is a completely different story. Ask a school board member or other politician who wants to remove DARE officers from the classroom, they will tell you the war is lost and the program is useless as they scream, “Show me the results!” Ask a teacher that sees what a good cop in a school can do and it is an invaluable asset in changing a child’s life. The teacher lives the results, while the politician just talks about them.

Now, ask someone who lives in a border town where people are kidnapped, tortured and murdered by the Mexican drug cartels. Or when your family is killed or your car is bombed because you are fighting against a drug cartel, things are different. Ask the wife of the rancher who was killed on his own property for trying to help someone — and I bet she sees it differently. To them it is a war, and most often against people from a foreign country. To them “losing” has a whole different meaning. It is a different story losing your loved one rather than your election.

Discussing It
So, are we winning? In my opinion the very discussion in those terms is purely academic and pretty much useless. In fact, just like everything else we discuss to death in this country it detracts from solving the real problems. But hey, you don’t get on national news, or elected to the next office actually fighting the war, only “discussing” it. Real problems exist from the use, sale, and abuse of drugs and will continue to do so no matter which slogan is used to describe how law enforcement is asked to deal with it. And make no mistake, we will be asked to deal with it no matter what it is called. I have spent well over 20 years fighting the effects of drug and alcohol abuse on the people I serve. I have lost friends to those who would kill you because of the effects. Truth is, I have been and am too busy fighting the “war” to care what the politicians and pundits who discuss its values ad nauseam think. Unfortunately it is primarily the people who talk about war that never experience its effects. Maybe if that role was reversed something might actually get done. What a novel idea! 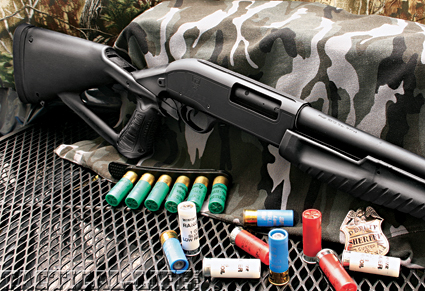 The Citadel LE Tactical is a SWAT-ready scattergun primed for door-busting action!