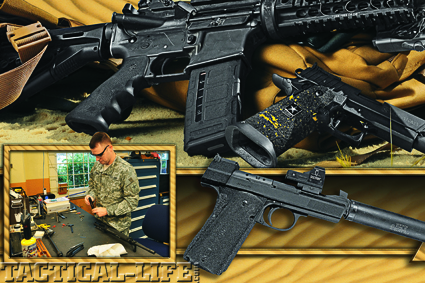 Feast your eyes on an M4 as issued by the USAMU. It has a stainless steel “match” barrel and a full-auto select match-grade trigger. The pistol is a .40-caliber STI rebuilt by the USAMU CFS. Sgt. Grant Kennedy, a Soldier with the US Army Marksmanship Unit, cleans the bolt of one of the unit’s Squad Designated Marksman Rifles used to train thousands of soldiers headed into harm’s way.
Comment(s)

It’s always advantageous to have the boss on your side, especially when he’s commander-in-chief of a world Superpower. In March 1956, marksmen received a positive push of presidential proportions when Dwight D. Eisenhower directed the establishment of the USAMU (Army Marksmanship Unit) to raise shooting standards throughout the U.S. Army. Since then Army shooters have managed hundreds of individual and team national titles, more than 40 World Championships and 23 Olympic medals. These advanced skills enhance combat readiness via the unit’s training courses and technical advice. AMU marksmen conduct small arms train-the-trainer clinics for U.S. military forces world wide. Composed of six shooting sections headquartered at Fort Benning, GA, the AMU teams comprise the Service Rifle, Service Pistol, Action Shooting, International Rifle, International Pistol, and Shotgun teams that are renowned as among the best in the world.

In the hands of every great marksman is an equally great firearm. No driver, regardless of skill, can take the checkered flag in a Yugo. Similarly, a marksman can’t out-shoot the mechanical limitations of his weapon. Recognizing the need for world-class equipment for world-class teams, the CFS (Custom Firearms Shop) was created at AMU headquarters, where they make or customize trophy quality small arms and much of the team’s ammunition. Made up of gunsmiths, machinists, range technicians and ammunition loaders, the CFS is the equivalent of a NASCAR pit crew. To the benefit of the entire Department of Defense, CFS research and development efforts directly lead to enhanced accuracy and reliability of fielded combat systems, including the M21 and M24 Sniper Systems, Special Purpose Receiver Rifles and Squad Designated Marksman Rifles and many individual special-purpose arms developed and tested for warfighters.

The Importance of Match Shooting
Before discussing the Custom Firearms Shop we should examine the reasons why match shooting is useful. Too many shooters, military and civilian, don’t realize that formal competition has been the primary driving force behind nearly every shooting skill and many important firearm developments. Almost every skill and training program concerning good shooting and gun handling can ultimately trace its origin back to some guy trying to earn points and win a contest. Many organized shooting contests originated from range exercises developed to teach skills with military-issue rifles and pistols. As shooters improved, match-grade versions were developed with the courses modified to further challenge marksmen and test new ideas, allowing improvements for current-issue service weapons and other firearms. As event participants improve their skills, accurized versions encourage further practice and development. While most shooters will never out-shoot rack-grade equipment, skilled competition marksmen can. Furthermore, top shooters trained at these higher levels typically make the best instructors. A recent example of this occurred during the mass mobilizations in 2004 when there was a heightened demand for Designated Marksmen. Personnel in charge of training quickly realized they lacked the skill and know-how to provide it for this specialty. High-level Service Rifle competitors, both military and civilian, were recruited at a number of mobilization platforms to handle the load. In addition to instructor development, competition pushes development of the equipment. National Match versions of all issue small arms have been made and the improvements developed to help win Service competitions have trickled down into combat gear. Notable examples for just the M16 developed by the CFS include improved A2 rear sights, free-float hand guards/rails, and magazine-length 77 grain projectiles (Mk 262).

It’s always advantageous to have the boss on your side, especially when he’s commander-in-chief…