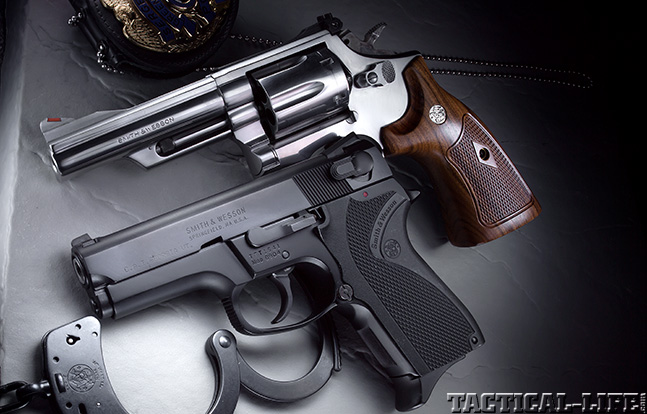 When it comes to law enforcement duty sidearms, the name Smith & Wesson carries a great deal of weight. Arming law enforcement officers for more than a century, Smith & Wesson’s revolvers—and later its semi-automatic pistols—have been on patrol with LEOs serving proudly during those many decades.

In the modern era of law enforcement handguns, two iconic Smith & Wessons stand out—what we now know as the Model 10 .38 Special revolver (known as the Military & Police at its introduction in 1899) and the Model 39 9mm autopistol. These two well-known and well-respected handguns set the stage for a long lineage of police pistols employed by LEOs through the 20th century and in some cases into the 21st.

The Model 10 was a paradigm-shifting handgun from the beginning. Not only did it set the stage for the incredibly popular K-Frame series of revolvers, but it also represented the introduction of what would become one of the most widely accepted and used revolver cartridges—the .38 Special. But, the importance of the K-Frame did not end with the Model 10, as it spawned numerous variants and chamberings over the years.

One of the most significant of these was one chambering the powerful .357 Magnum cartridge, introduced in the 1930s. This cartridge was developed to offer a step up in power over the .38 Special, and was first offered in an N-Frame gun we now know as the Model 27, a large revolver that could handle the extreme power of the new cartridge. But, in the 1950s improvements in metallurgy allowed Smith & Wesson to get the powerful round into a K-Frame-sized revolver dubbed the “Combat Magnum.” Introduced in the mid-1950s, the revolver was soon re-designated as the Model 19.

“It was if I … were holding these handguns as they had appeared right out of the factory, on their way to their respective departments for duty.”

The Model 19 (and later its stainless-steel sibling, the Model 66) would become one of the most iconic police revolvers of the 20th century. Combining the impressive power of the .357 Magnum cartridge with the excellent handling characteristics of the K-Frame, the new magnum was an immediate hit.

But, while Smith & Wesson was clearly one of the most respected revolver-makers in the world, the company did not rest on its laurels. Recognizing a shift in interest in the United States toward semi-automatic pistols in the post-World War II era, the company began development in the 1950s of what would become the progenitor of an extremely successful line of autopistols—the Model 39. The pistol has the distinction of being the first U.S.-made double-action 9mm autopistol. Adopted by the Illinois State Police, the semi-automatic pistol represented the future of law enforcement sidearms.

In fact, the Model 39 spawned numerous classics, such as the Model 59 (which incorporated a double-column magazine), and led to the introduction of the “Second Generation” of S&W autopistols that furthered the evolution of the design. These single- and double-column pistols continued the tradition of LE service for the S&W autopistols and set the stage for the “Third Generation”—easily one of the most expansive lines of handguns ever offered, with innumerable variants available in a range of chamberings, sizes and systems of trigger operation. This series also represented one of the most common types of autopistols found in the holsters of LE officers well into the 1980s and beyond.

Although the S&W Third Generation autos and K-Frame revolvers served admirably, as the years passed wear and tear would cause departments to trade them in for newer models. This fact provides a unique opportunity to pick up samples of these classic police pistols at very reasonable prices.

I recently was looking through a Century Arms catalog and spotted two very interesting examples of this: a stainless Model 66-1 .357 Magnum and a blued Model 6904 Third Generation 9mm compact pistol. The Model 66-1 is a terrific representative example of a duty-style Smith & Wesson revolver, and the 6904 is a good example of an undercover or backup carry variant of the Third Generation series.

Although they were both rated in “good” condition by Century, I asked the company if it would be possible to get some of the ones it had in the “roughest” condition possible. The reason for this was I had a project in mind for them involving the Smith & Wesson Performance Center. (As a side note, Century’s supply of these types of firearms can change daily, so keep an eye out for what they may turn up.)

While most people know the Performance Center for its outstanding work on building specialized and enhanced versions of base Smith & Wesson firearms, not as many may be aware of the fact that it also does impressive restoration work as part of its gunsmithing services. For those who have guns that could use a tuning up, but only want it done by the experts at the factory, this is an ideal option. During a conversation with Tony Miele, manager of the Performance Center, we worked out a plan for the restoration of both handguns to their former glory as first issued for LE service. With the plan in place, I sent the 66-1 and the 6904 to S&W for the work.

“Their finishes were impeccable, and the smoothness of their triggers and actions was outstanding.”

Of the two, the Model 66-1 was in rougher shape. It was mechanically sound but had a significant amount of finish wear and poor condition grips. The revolver was broken down completely and inspected for any damage or undue wear, with parts replaced as needed (including the grips). Also, the action was tuned for improved performance. The entire revolver was then cleaned, polished, reassembled and test-fired for function.

The Model 6904 was in better condition, with minimal wear and tear. Just like the 66-1, the 6904 was broken down and thoroughly inspected for any damage. In addition to swapping out any parts that needed replacing (like the wraparound synthetic grips), the 6904 was given what the Performance Center calls its “Action Package,” which consists of the barrel ramp and hood being polished, the action tuned and the pistol test-fired. In addition to this, the entire pistol was polished to remove dings and scratches, bead blasted, and the alloy frame was anodized while the slide was blued.

Once completely done, the two pistols were packed up and shipped back to me for inspection. Needless to say, I was quite impressed. It was if I had stepped into a time machine and were holding these handguns as they had appeared right out of the factory, on their way to their respective departments for duty. Their finishes were impeccable, and the smoothness of their triggers and actions was outstanding.

With two classic duty guns like these in hand, I knew I wanted to go to the experts for the work needed. That is why I went to the Smith & Wesson Performance Center. Basically, I knew that I could count on the fact that the work would be done “right.” If you have a classic duty pistol that could use some attention and care, be sure to check out what the Smith & Wesson Performance Center might be able to do for you. 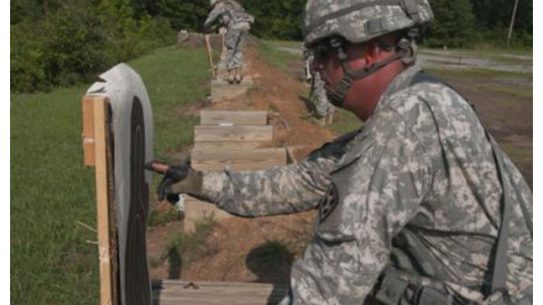