MARINE CORPS BASE CAMP LEJEUNE, N.C.  —  In an effort to prepare them for an upcoming deployment to Afghanistan, Marines from 2nd Battalion, 2nd Marine Regiment, 2nd Marine Division, participated in a unique field training exercise aboard Camp Lejeune, N.C., July 15.

Patrolling one of Camp Lejeune’s urban training facilities, groups of 12-30 Marines of Company F, just as they would in Afghanistan, learned how to combat improvised explosive devices and hostile insurgents, while at the same time interact with Afghan citizens.

Second Lt. Brian McGrath, the first platoon commander for Company F, said he believed the training is an important step in preparing the Marines for Afghanistan, so mistakes can be made in a training environment instead of oversees.

What added to the realism of the exercise was the presence and participation of men and women of Afghan descent.  This is a departure from earlier exercises where Marines had been role players.

“This is getting us used to the culture differences between the Iraqi and Afghan people,” said Sgt. Jeremy Beaudette, a Company F squad leader. “They’re setting up the training to mimic what’s going on in Afghanistan.”

Marines talked about the usefulness the Afghan natives brought to their training.

During one group’s patrol, a loud blast broke the relative silence as pyrotechnics signified a simulated IED had been detonated.  Arriving at the scene of the ‘explosion,’ the Marines found a simulated casualty.

The simulated casualty, coupled with the interaction between the Marines and the Afghan role players, enabled the Marines to place another tool in their kitbag in anticipation of their upcoming deployment in support of Operation Enduring Freedom. 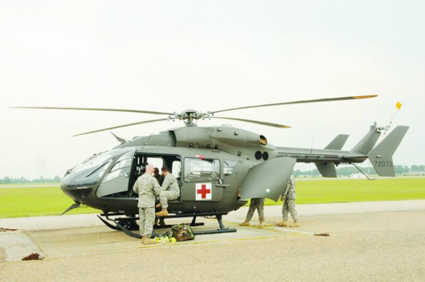 MARINE CORPS BASE CAMP LEJEUNE, N.C.  —  In an effort to prepare them for an upcoming…