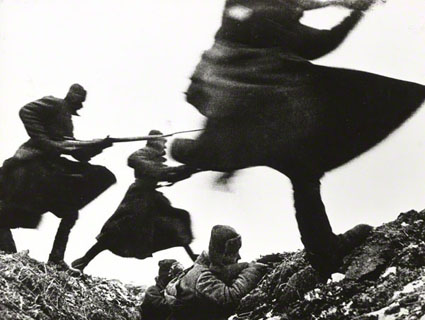 The Annenberg Space for Photography today announced its next installation, WAR/PHOTOGRAPHY: Images of Armed Conflict and Its Aftermath. This unprecedented exhibit will open free to the public in Los Angeles on March 23, 2013 and run through June 2, 2013. This exhibition has been organized by The Museum of Fine Arts, Houston.

WAR/PHOTOGRAPHY encompasses over 150 images going as far back as 1887 through present-day and is arranged by themes presenting both the military and civilian point of view including the advent of war, daily routines, the fight itself, the aftermath, medical care, prisoners of war, refugees, executions, memorials, remembrance and more.

The exhibit includes the work of award-winning portrait photographers and photojournalists, military photographers, amateurs and artists including iconic images such as Joe Rosenthal’s Old Glory Goes Up on Mount Suribachi, Iwo Jima and Alfred Eisenstaedt’s V-J Day, Times Square, New York. Recognizable from news coverage is Eddie Adams’ image of the execution of a Viet Cong prisoner on the streets of Saigon.

The film offers intimate interviews that reveal experiences of sacrifice and courage as well as the life-threatening situations faced by war photographers and their subjects. The stories include photographer Joao Silva revisiting sites in South Africa, recalling the violence that led up to that country’s first democratic elections in 1994. Ashley Gilbertson is filmed in Midland, Texas, on the final shoot of Bedrooms of the Fallen, a book project examining the bedrooms of young soldiers who never returned home from war. Other photographers share their experiences documenting conflict in Vietnam, Iraq, Afghanistan, Haiti, Liberia, Sudan and the Middle East.

ALEXANDRA AVAKIAN – Photojournalist Alexandra Avakian has been published in National Geographic, Time, LIFE, The New York Times Magazine and more. Her photographic and written memoir, Windows of the Soul: My Journeys in the Muslim World, was named as one of American Photo’s year-end best.

CAROLYN COLE – Carolyn Cole is a multiple award-winning photographer and a staff photographer for the Los Angeles Times. She has covered conflicts in Iraq, Kosovo, Afghanistan, Haiti and Liberia, where she earned the Pulitzer Prize for her coverage of the siege of Monrovia.

ASHLEY GILBERTSON – Ashley Gilbertson is a recipient of the National Magazine Award for Bedrooms of the Fallen and the Overseas Press Club’s Robert Capa Gold Medal for his work in Fallujah. Gilbertson’s first book, Whiskey Tango Foxtrot, chronicles his arrival on the eve of the U.S. invasion of Iraq as a 25 year-old photojournalist.

EDOUARD H.R. GLÜCK – American photojournalist Edouard H.R. Glück began his photographic career as an American soldier in the Iraq War. His work has been published in the International Herald Tribune, the Wall Street Journal, GQ, the Guardian, Newsweek and Time. He is a contributor to the Associated Press and Bloomberg.

DAVID HUME KENNERLY – David Hume Kennerly won a Pulitzer Prize for his coverage of the Vietnam War. He has been shooting on the front lines of history for more than 45 years and has photographed 8 wars, as many U.S. presidents and was named “One of the 100 Most Important People in Photography” by American Photo.

JOAO SILVA – Award-winning photographer Joao Silva co-authored The Bang-Bang Club: Snapshots from a Hidden War, a factual account of news photographers in South Africa who covered the end of apartheid. Silva was severely wounded in October of 2010 after stepping on a land mine while on assignment for The New York Times in Afghanistan, sustaining life-threatening injuries and losing both legs. He continues with surgical procedures at the Walter Reed National Military Medical Center.

WAR/PHOTOGRAPHY: arrives in Los Angeles from The Museum of Fine Arts, Houston before it travels to the Corcoran Gallery of Art, Washington, D.C., and the Brooklyn Museum.