1 of 6
Warrior’s Trident: LWRCI’s TRICON MK6 Rifle
At the range, the TRICON MK6 proved to be an ideal size and weight and was 100-percent reliable during the evaluation.

2 of 6
Warrior’s Trident: LWRCI’s TRICON MK6 Rifle
Surrounding the spiral-fluted barrel and piston operating system is LWRCI’s SPR handguard, which is drilled and tapped along the 3, 6 and 9 o’clock positions for adding accessory rails.

5 of 6
Warrior’s Trident: LWRCI’s TRICON MK6 Rifle
For the TRICON MK6, Gonzales specified a collapsible B5 Systems SOPMOD stock for a positive mount and cheekweld.

6 of 6
Warrior’s Trident: LWRCI’s TRICON MK6 Rifle
After years in the Naval Special Warfare community, Jeff Gonzales founded Trident Concepts to prepare students for “the worst day of their life!” This is the driving force behind the new TRICON MK6.

“How good is good enough?” This is a question that, as students, we have asked ourselves over and over again. The question is in quotations because it also comes from the first chapter of Jeff Gonzales’ book Combative Fundamentals: An Unconventional Approach. After a very successful career in the Naval Special Warfare community, Jeff founded Trident Concepts, or TRICON, with the goal of building a curriculum to prepare students for “the worst day of their life!” He developed his program based on three principals. First, the tactics, techniques, and procedures (TTPs) would be based on real-world “battlefield experiences.” Second, standards are essential to elements in a training program. Finally, “performance is what matters.”

Gonzales goes on to write, “We start by imparting onto you a genuine need to learn. This need leads to motivation to train, not simply to maintain proficiency, but to improve mastery. Proficiency leads to confidence—confidence in your ability to perform under any conditions or situations. Confidence leads to motivation to train, which starts the cycle all over again, perpetually in motion.” Gonzales not only preaches this, he lives it. Several times a year, he will “sneak off” and take a class from a number of instructors that he respects. A good instructor never stops learning and growing. A side benefit is that being a student, and letting someone else worry about running the class, is just plain fun.

There is no warm-up or previewing the course of fire in the real world. Gonzales believes that the baseline of any skill is what the student can perform cold, with no preparation. Normally, the first live-fire relay of any class involves a 25-round assessment drill fired from 50 yards to 5 yards. To quote Gonzales, “You never know what kind of gunfight you are going to get in, what the range will be, or how many bad guys there will be!”

Those who expect preferential treatment or an easy certificate need not apply. The standards are the standards regardless of who you are, where you work or what title you hold. Standards with no failures are not standards. Gonzales believes that to seriously train, you have to be pushed hard enough that you may fail. Failure is a part of the training process and serves as a measure of progress. To quote Gonzales, “Instructors who don’t hold to the standards instill a false sense of security in the student. Students that come through our doors become part of the family. We don’t want a family member hurt because we didn’t do our job.”

Gonzales has some very specific preferences when it comes to gear. Like his courses, he’s more concerned about performance and reliability than appearances. Gonzales has had a very close relationship with LWRC International for several years. This collaboration resulted in the original LWRCI TRICON rifle in 2010. The objective of the project was to develop a carbine that featured the latest enhancements for improved reliability and accuracy over the standard-issue M4.

When LWRCI introduced the new M6 IC architecture, it was only natural that Gonzales would update his signature rifle to the new platform. The new TRICON MK6 is a limited-edition rifle with 500 units available in Sniper Gray Cerakote and 500 units in Flat Dark Earth Cerakote. This top-notch rifle represents a synergy between design, components
and performance.

For those who are not familiar with the M6 IC, it features a newly designed lower receiver with ambidextrous controls. The left-side magazine release is a large paddle that is recessed between two raised ribs. This prevents inadvertent magazine dumps and also provides a tactile guide that assists in locating the paddle. The bolt catch on the right side is a mirror image of the standard unit and is easily manipulated with the trigger finger. While the standard M6 IC carbine is equipped with an ambidextrous safety, Gonzales specifically set up the TRICON MK6 with a mil-spec, left-side-only safety selector. A two-stage Geissele Super TRICON trigger also comes standard on the TRICON MK6. The trigger on my test rifle broke cleanly at 5.25 pounds. Based on his experiences, Gonzales also specified a B5 Systems SOPMOD stock for a positive mount and cheekweld.

The Monoforge upper receiver features a 9-inch-long, low-profile SPR handguard that has threaded positions along the 3, 6 and 9 o’clock axes, allowing the user to mount rail sections where required. Without any accessory rails attached, the forend is very slim, making it very comfortable to index. A BCM Gunfighter Gen 4 charging handle enhances operations in adverse conditions or while wearing gloves, and the Magpul MIAD pistol grip provides a solid purchase. Gonzales also prefers to run the rifle with a TangoDown short vertical foregrip installed.

All LWRCI rifles feature a patented, self-regulating short-stroke piston system. This design eliminates the gas and carbon buildup in the receiver and bolt carrier group, enhances reliability, and reduces felt recoil and muzzle rise. Even with the piston system, LWRCI rifles retain 80 percent parts commonality with traditional direct-impingement rifles. The piston is accessible by loosening two retaining screws and removing the top portion of the rail assembly. The design captures the retaining screws and allows for easy maintenance in the field. As with all LWRCI rifles, the one-piece bolt carrier is coated with a proprietary nickel coating to prevent corrosion and provide increased lubricity.

The barrel is the key to accuracy, and all LWRCI barrels are forged from 41V45 steel using high-pressure rotary hammers. This process results in near-perfect rifling that is molecularly stronger than other forms of rifling. The barrels are also treated with NiCorr that is “more lubricious, harder wearing, and more heat and corrosion resistant than normal hard chrome.” The company has tested its barrels to 20,000 rounds, as compared to the 6,000 to 10,000 rounds for standard mil-spec barrels. My test rifle featured a 14.7-inch, 1-in-7-inch-twist barrel with a permanently pinned A2-style flash suppressor. This configuration is the most compact available while still being a non-NFA configuration. The TRICON MK6’s barrel also features spiral fluting, which reduces weight, improves cooling and looks great.

When it came to sights, Gonzales specified Magpul’s MBUS Pro backup sights. These are extremely low profile and lack the obtrusive base and protective ears of some designs. In addition, adjustments for windage and elevation can be made without needing a tool. Finally, as mentioned, the TRICON MK6 comes in an attractive Cerakote finish, either Sniper Gray or Flat Dark Earth. My test rifle had the former.

On the range, I tested the carbine’s accuracy at 100 yards with a Leupold 2.5-8x36mm Mark 4 scope with a LaRue SPR mount. The TMR reticle and light gathering capabilities make the Mark 4 series of scopes ideal for the law enforcement community. I have found this particular scope to be extremely versatile, and it has become my go-to glass for any AR evaluation. The illuminated reticle also provides a low-light capability.

After getting the formal accuracy work out of the way, I mounted Aimpoint’s new Micro T-2, again using a LaRue Tactical mount. The new T-2 offers improved lens coatings, light transmission and clarity. The new housing has protective wings for the elevation adjustment and new flip-up lens covers. Like the T-1, the T-2 has eight daylight settings and four settings that are compatible with night vision. A single 3-volt lithium battery provides 50,000 hours of constant run time in a daylight setting. Finally, the T-2’s new steel helicoil inserts, for the mounting screws, are less likely to be stripped and are easily replaced.

The first thing that several shooters at my range who tried the TRICON MK6 noticed was how well it was balanced. This improved target acquisitions and transitions while reducing muscle strain during prolonged drills. The short Tango-
Down foregrip worked best as a hand stop, making it easy to lock the rifle into the shoulder pocket. This was also my first experience with the Magpul MBUS Pro sights. The rear sight’s tapered design made it easier to see things in the periphery than some older designs. The finger adjustments were user friendly, and I really appreciated not having to resort to using a sight adjustment tool.

In short, I liked everything about this new rifle. The TRICON MK6’s ergonomics, balance and handling were as good, or better, than any black rifle I have tested, including the LWRCI IC-SPR I recently purchased. The TRICON MK6 also comes standard with a Magpul TRICON Custom tactical sling and a Gen 2 PMAG. The package is ideally suited for anyone who is serious about having a rifle for “the worst day of your life!”

Trident Concepts offers a variety of weapons courses, including three levels of tactical pistol and tactical rifle, close quarters battle and mid-range marksmanship. In addition, the company offers several specific classes, called “proficiency modules,” that include strong-hand-only shooting, shooting on the move with pistols and carbines, low-light tactics and fighting with edged weapons. If that were not enough, the company also offers a number of tactics courses, including active hostage rescue instructor, shoothouse instructor, pistol and carbine instructor, and vehicle assaults.

If you’d like to learn more about Gonzales, pick up a copy of his excellent book, Combative Fundamentals: An Unconventional Approach, subscribe to his newsletter and follow his blog. His entries cover a wide variety of topics from tactics to daily living and training guidelines with a little philosophy thrown in for good measure. 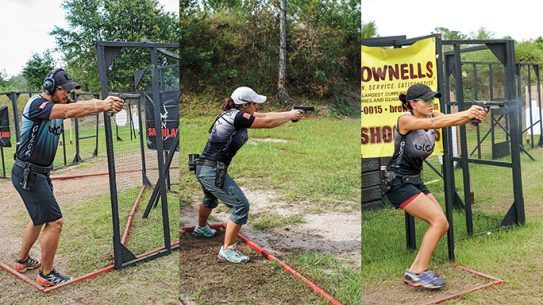