Three days of aerial combat, so to speak, with some West Texas feral hogs and fawn-eating coyotes set the stage for a thrilling way to wring out some special hardware. Swapping back and forth, I relied on a few hundred rounds of high-speed and subsonic 300 AAC Blackout ammo to hammer 35 coyotes and 76 wild hogs.

Not only was it a great proving ground for the relatively new reincarnation of an older cartridge, but this extreme hunt also tested the reliability of Advanced Armament Corporation’s 16-inch-barreled MPW AR-platform rifle. I also had AAC’s 10.5-inch-barreled MPW upper on hand, and I used an AAC 762-SDN-6 sound suppressor between both platforms to tame the noise while shooting from inside of the helicopter.

AAC’s MPW (Multi-Purpose Weapon) in 300 Blackout is direct-impingement carbine that first appears like most other AR-15 clones, but when you look closely, some important features distinguish the MPW as a better-than-average modern sporting rifle. The carbine’s upper and lower receivers are matched, and the 16-inch-barreled upper is designed for use with a carbine receiver extension, a standard GI buffer spring and a carbine buffer.

Getting on target from a moving, vibrating, wind-swept chopper while the crop-raiding hogs and deer-munching coyotes did their best to disappear compounded the challenge. Up to the test was Trijicon’s ACOG, which was specifically configured for use on a 300 AAC Blackout rifle. Even better than the 3X ACOG for finding moving targets was Trijicon’s 1-4X AccuPoint scope with a German post reticle. Sitting atop the post was an illuminated solid triangle, and instead of using the bright yellow-tipped reticle’s uppermost point as the aiming point, the center of the triangle matched the point of impact. Prior to going aloft, I centered the point of impact at 35 yards in the center of the triangle. Simplifying the aiming system and keeping the optic at 1X magnification kept hit ratios extremely high at just over one hit on a moving target for every 2.4 rounds fired.

To learn more for your AR needs, check out the 2015 issue of AR RIFLEMAN, available on newsstands and digitally Oct. 28, 2015. To purchase a copy, go to Tactical-Life.com/subscribe/ar-rifleman-buyers-guide. 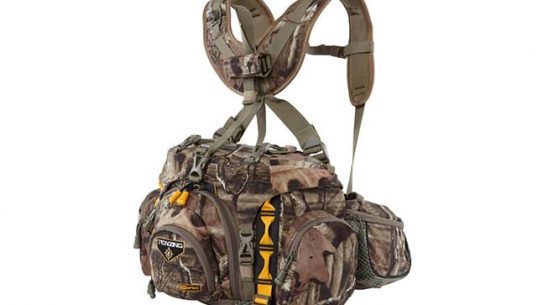 The 1250 Lumbar Pack from Tenzing features 1250 cubic inches of storage to go...