WAY OF THE GUN PRECISION RIFLE

by P. J. White
in Uncategorized
0

0
SHARES
0
VIEWS
Share on FacebookShare on Twitter
A SOF operator observes trace and calls wind holds for an unidentified US military sniper.

“Ready.” The shooter, lying prone behind his Remington 700, is poised to take his shot, waiting with anticipation for his spotter to call the wind correction needed to ensure a first-round hit. “Left, point-five,” is the whispered reply.

The shooter adjusts his rifle so that his scope reticle indicates a 0.5 mil hold into the wind. The shot breaks less than two seconds later, leaving only a minute signature of gray/blue smoke drifting across the green Alabama grass. Several seconds later, the shooter is rewarded with a resounding metallic clang, which echoes across the valley. His shot has hit its intended mark—in this instance a 10×12 steel plate—situated 680 yards from the firing line.

I was recently invited to attend a one-day Way of the Gun Precision Rifle course located in Lincoln, Alabama. Taught by Frank Proctor, an Army Special Forces veteran with extensive CQB and sniper experience, Way of the Gun courses allow military, law enforcement, security, and select civilian shooters the unique ability to obtain cost-effective training that is seamlessly tailored to the end-users’ specifications. 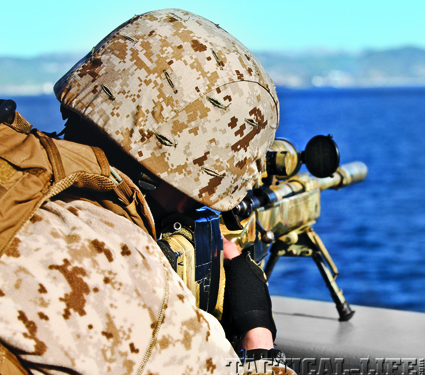 Maritime precision rifle engagements require a mastery of the basic marksmanship fundamentals, as the additional wave motion increases the complexity of such shots.