Weapons of the U.S. Navy SEALs

2
SHARES
383
VIEWS
Share on FacebookShare on Twitter
Nothing gives a weapon system more credibility than a stamp of approval by the U.S. Navy SEALs. These Tier 1 operators use an extensive array of weapon systems that, in some cases, were developed specifically for their mission requirements. The controversial Colt M4A1 carbine remains the standard issue weapon for SEALs while pistols are carried as a secondary tool. A SEAL team’s weapons choice is always dependent on mission requirements and what follows is short list of tools commonly found in their kit: 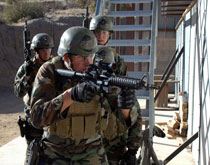 ASSAULT RIFLES:
Colt M4A1 5.56 NATO
The Colt M4A1 is a SEAL’s primary weapon and features the SOPMOD (Special Operations Peculiar) accessory kit including a six-position Crane collapsible stock. More compact than the U.S. Navy’s standard issue M16A2, the modular M4A1 can be reconfigured by the user for missions with a grenade launcher, shotgun, various optics, lasers and illumination tools. Capable of both semi-auto and full-auto modes, the M4 has a rate of fire between 750 and 900 rounds per minute and uses a quick-attach suppressor. Additional enhancements are currently being considered.

SNIPER RIFLES:
Knight’s Armament Mk 11 SWS 7.62 NATO
The Mk 11 SWS (Sniper Weapon System) is based on the highly accurate SR-25 also produced by KAC. The Mk 11 was developed to meet a solicitation placed by the U.S. Navy SEALs. Featuring controls like the standard issue Colt M4A1, the Mk 11 is a unique semi-auto-only sniper rifle that can be suppressed and is capable of delivering effective precision beyond 1,000 yards.

Barrett M82A1 SASR .50 BMG
Procured in time for the first Gulf War, the M82 made a reputation for long range and deep penetrating effectiveness against hard targets. Adopted as the SASR (Special Application Scoped Rifle), it has expanded capabilities with EOD (Explosive Ordnance Disposal) and as extreme range anti-personnel rifle. This short recoil, rotating bolt semi-automatic rifle delivers high energy and was famously used in Somalia by the SEALs in 1993 against many enemy vehicles. 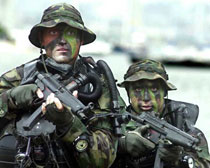 SUBMACHINE GUNS:
HK MP5N 9mm NATO
The compact MP5 continues to be popular among elite counter-terror organizations. Operating from a unique roller-delayed blowback system, the MP5N was developed by Heckler and Koch specifically for the SEALs. This “Navy” model fires from both a closed and locked bolt in semi-auto, burst, or full-auto modes. The 800 round-per-minute MP5 is extremely accurate and provides a superb option for CQB operations earning praise from the SEALs for its controllability, smooth operation and accurate shot placement.

MACHINE GUNS:
FN M240 7.62 NATO
The M240 is a widely used machine gun that has been seen service ranging from a base of fire to coaxial configurations supporting main guns on armored vehicles. It is known for its high reliability and operates from the open bolt. The M240 features an adjustable gas system that fires between 650 and 950 rounds per minute and the M240B and M240G models feature a bipod. Even though it is heavier than the M60, the M240 is expected to completely replace the M60 due to its easy maintenance and impressive reliability.