Every area of human endeavor has its watershed moments—a time when everything changes. For law enforcement officers in the United States, one such moment occurred on August 1, 1966. On that day one Charles Whitman went on a killing spree at the University of Texas in Austin. Fourteen innocent people were killed and 32 wounded before police officers were able to storm Whitman’s position and kill him with a shotgun. 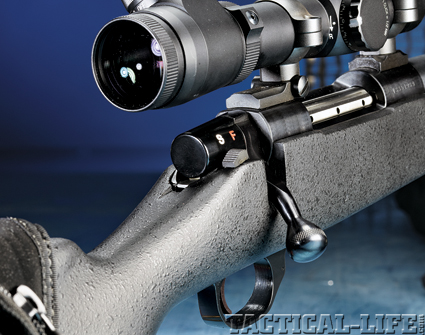 The Vanguard features a two-position
safety, with rear as “safe” and forward as “fire.” Note the red and white lettering.

At that time, organized Special Weapons And Tactics (SWAT) teams were unheard of. Domestic terrorist acts such as the Whitman incident were “unthinkable.” As we know now, after the “clock tower” incident, law enforcement agencies began forming and training SWAT units to deal with just such problems. Over the years, training and education for these specialized units has evolved and doctrines written. In the military it is said, “There are very few problems that cannot be solved by the proper application of high explosives.” For the law enforcement community, I would say there are few felonious problems that cannot be solved by proper application of a single rifle shot. 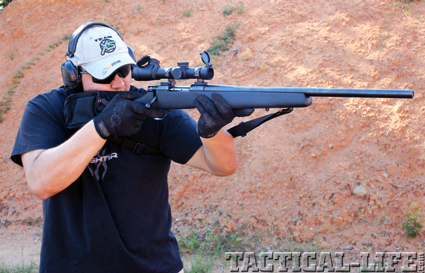 The author put the light handling Weatherby through its paces at 100 yards with no malfunctions and achieved quite good accuracy. Photo courtesy Paul Markel.

Consider the North Hollywood Bank Robbery in 1997. Two well armed and armored, highly motivated bank robbers held off dozens of police officers armed with pistols and shotguns. The scenario played out for nearly an hour before SWAT officers arrived and corralled the villains. One well-trained officer with a high-powered rifle could have ended the situation much sooner with two bullets.